EPAC’s AVENUE Q is a Smash 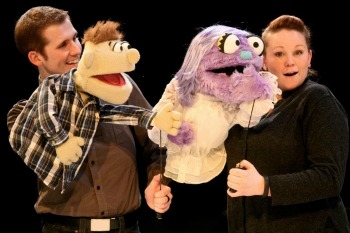 Avenue Q is an adult themed and zany musical which is similar to Sesame Street and at times The Electric Company, but for adults. This musical won three Tony Awards for Best Musical, Best Score and Best Book. Ephrata Performing Arts Center’s production of this show does not disappoint and their version of Avenue Q is a hilarious success.

Avenue Q tells the story of several characters, humans and monsters, and about the challenges they face. It is a story where the characters struggle with the difficulties of everyday life and the realization that life does not necessarily turn out the way you expect. This show is one that will make you laugh out loud throughout the entire show, as well as touch your heart.

All the actors in Avenue Q were remarkable in their portrayal of their characters.  This is an exceptionally talented cast, and they deserve praise for their outstanding production of this show. Katelyn Ann Mullen plays the sweet Kate Monster as well as the bold Lucy the Slut. Her voice is sensational, and her songs are full of passion. Mullen singing “There’s a Fine, Fine Line” is one of the highlights of the show. Sean Deffley portrays Princeton and Rod and both characters in different ways are trying to find their direction in life. Deffley’s song “Purpose” is full of energy. In addition, Mullen and Deffley’s song “Mix Tape” is a sentimental song that shows the innocence of these characters. Preston Schreffler portrays the characters of Nicky and Trekkie Monster. He has some of the funniest scenes in the show and his rendition of “If You Were Gay” does not disappoint. The song “The Money Song” is full of spirit and shows off the talent of this wonderful cast.

Edward Fernandez who serves as the director needs commended for assembling this talented group of actors and letting them shine. The creative team includes Evan Hill as Set Designer, Pat Kautter as Choreographer, and Cheryl Markle as Musical Director.

Avenue Q is packed with lots of heart and humor and will have audiences laughing throughout the show and after.  Call Ephrata Performing Arts Center for tickets at (717) 733-7966 or visit them online at www.ephrataplayhouseinthepark.org.

*Special Note: There is adult themed language and subjects throughout the show, which makes this show an adult-only musical.

Final Thought: EPAC’s Avenue Q is a fantastic show and gives audiences an evening of fun and laughter.

We just saw this show this afternoon, so I came here to see if you had seen it too. I thought the cast was fabulous, and the show had me cry-laughing a number of times. I wish that I could go back and see it all over again! It was a refreshing counterpoint to all the Sesame Street I see these days ...