EPAC’s Angels in America Part I: The Must See Play of the Season

Occasionally a play comes along and completely amazes me. I will start this review by saying that this is the most exceptional play I have seen in a long time – and I rarely give a play that type of glowing statement. From the first scene until the end, Angels in America is astonishing. The script is beautiful, the acting is superb and the stage direction is phenomenal. Ephrata Performing Arts Center’s Angels in America is full of energy, emotion, and magnificence.

Part One of Tony Kushner’s Angels in America is entitled “Millennium Approaches.” Kushner wrote the two-part play in the 1990s and addresses topics such as HIV and AIDS. These are not the only themes in this play though, and that is why this play is relevant almost thirty years after it was written. Angels in America addresses topics such as ethnicity, politics, religion, and economics. It is about love, hope, death and change. In addition, this play is about self-acceptance. There are times this play is emotional, and there are parts that will make you laugh. The script is smart and witty, and the time flies by during this show.

EPAC’s Angels in America Part One is excellently directed by Edward R. Fernandez and Pat Kautter serves as the assistant director. The direction of this play is exquisite. The set design by Mike Rhoads and the costumes by Danae McQueen are magnificent. Every person involved with this play deserves applause because this show is a masterpiece. 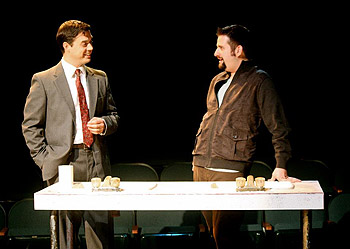 The plot of Angels in America Part One is split between two couples:  Prior Walter and his lover Louis and a married Mormon couple: Joe, a Republican lawyer, and Harper, his unhappy, valium addicted wife. Daniel Greene plays Prior Walter, a young man who is dying of AIDS. Greene is superb in this role. With the expression of the line, “My heart is pumping polluted blood,” the audience is emotionally involved with this character. The audience can feel his suffering and fear.  Bob Breen plays Louis, and he is outstanding in this part. This character is conflicted, and Breen’s portrayal of Louis’s emotional conflict is accomplished.  Andrew Kindig brilliantly portrays the character of Joe Pitt. Through Kindig’s performance, audiences can see Joe’s struggle throughout the play. Amy Carter play Joe’s wife, Harper. Harper is in a constant struggle and on an emotional roller coaster; Carter’s portrayal of this character depicts the pain Harper lives with. Carter’s performance in Angels in America is outstanding. Richard Bradbury plays Roy Cohn, the unscrupulous lawyer who is a complex character.  Bradbury depicts this character as a man suffused in anger. Bradbury’s performance is exceptional and brings forth the many nuances of this character. The rest of the cast: Adam Newborn as Belize, Kristie Ohlinger as the Angel and Nurse, and Elizabeth Pattey as various roles including Hannah Pitt and Ethel Rosenberg are first-class. The entire cast and crew of this show deserve a standing ovation.

Angels in America is definitely one of the best plays of the last century, and EPAC creates a beautiful and astounding production of this play. This play is emotionally moving as each character’s story is told in Angels in America. This play is a fantastic start to EPAC’s 2013 season and I cannot wait for Part II.

Angels in America Part I: Millennium Approaches runs through March 16, 2013. Call the Ephrata Performing Arts Center box office at (717) 733-7966 for tickets or order online at www.ephrataperformingartscenter.com.

Sounds like a wonderful show! I am calling tomorrow to get our tickets. Thanks for sharing.

What a fantastic review of a play that still resonates! It sounds like this adaptation is more than worth seeing and I’m especially excited to see the performances of Breen and Bradbury.