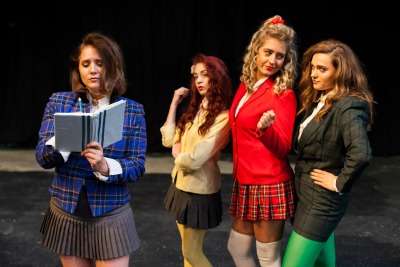 When Ephrata Performing Arts Center announced last year that they would be doing Heathers: The Musical I was thrilled because I remember this film, being a child of the 80s. That being said it has been over twenty years since I have seen the movie, and I did not remember much other than it had a clique of four high school girls, three named Heather, and one named Veronica played by Winona Ryder. What I did not recall as clearly was the dark nature of the plot, which can come across as disturbing to some, especially since it touches on themes that were once considered dark fantasy in the 1980’s, although similar events have since occurred in our country and are now a part of our national psyche. However, Ephrata Performing Arts Center, under the direction of Edward R. Fernandez, does an exceptional job with this dark comedy. The production is strong with a cast that imbues a great deal of energy into their characterizations.

Heathers: The Musical is based on the 1988 cult movie of the same name. The show has music, lyrics and book by Laurence O’Keefe and Kevin Murphy. The plot of the show is about a rather mean clique of popular teenagers, three girls named Heather, who by happenstance allow Veronica to join their group. Veronica proves her worth to the Heathers when they discover her exceptional forgery skills. The show contains all the character stereotypes one would expect from a 1980’s high school: the jocks, the popular kids, the outsiders and the misfits. The show is labeled as a dark comedy, and parts of the show are about serious issues such as bullying, teen suicide, homophobia and gun violence. Viewing this show in the 21st century, without the veil of historical innocence and societal presence of mind of actually being in the 1980’s, I found some of the scenes difficult to watch. Seeing this show in a time that bullying and school shootings are prevalent issues as well as a number of other themes in the show, even if they are presented in a dark comedic way, are challenging to watch. In particular, seeing a character in a trench coat who begins the show as a troubled young man, and ends up wanting to gun down members of his class is extremely difficult to watch in an age post Columbine. In the late 20th century the tragic outcome of this show was something that was squarely fictional, now, in the 21st century it is something that unfortunately we are all too familiar with. Heathers: The Musical is not a show for everyone, it is a dark comedy, and its topics can be offensive or unsettling to some viewers. However, despite my issues with some of the themes in the show, EPAC did an outstanding job with the over the top crassness of the production.

Director, Edward R. Fernandez, and the cast present an excellent production of this show. In the role of Veronica is Martha Marie Wasser. Wasser gives a standout performance as a person desperate to be popular in her final year of high school. In addition, Wasser’s vocals are strong throughout the production particularly in the song, “Prom or Hell.” Michael Roman plays the mysterious and flirtatious trench coat wearing bad boy, J.D. Roman brings out the sharpness of this character, and he and Wasser have great chemistry. In particular, they are excellent in their number “Seventeen.” Playing the three “Heathers” are Maggie Shevlin, Corina Raine Connelly and Meghan O’Neill. These three fine actors are perfectly sassy in their roles playing the mean girls. Also, they were excellent in the number “Big Fun” with the exceptional choreography by Lawrence Love. The heart of the show really comes from Martha who is played by Emily Rhinehart. Martha is a person who just does not fit in with any group and has been able to maintain her childhood innocence. Rhinehart brings a lot of heart to this role. Her song in the second act, “Kindergarten Boyfriend” is a strong number vocally, and a stand-out number in the production. Brian Viera and Drew Boardman are over the top as the high school jocks, and their edgy songs are there to provide for a level of comic relief. Niki Boyer Swatski is amazing as Ms. Fleming, the ex-hippy who is now a high school teacher. She adds moments of levity, and shines in the song “Shine a Light.”

Heathers: The Musical runs at Ephrata Performing Arts Center through November 5, 2016. For more information and tickets visit their website at www.ephrataperformingartscenter.com or call the box office at 717-733-7966.

Final Thought: Heathers: The Musical at Ephrata Performing Arts Center is a show full of standout performances under the strong direction of Edward R. Fernandez. Although this show may not be everyone, the cast and crew of this show do an excellent job with this dark comedy.