EPAC Presents a Forceful and Poignant THE ELEPHANT MAN 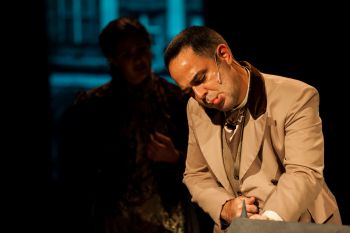 I openly admit that my only familiarity with the story of Joseph Merrick, the person who The Elephant Man is about, came from the 1980 film starring John Hurt and Anthony Hopkins. I was unaware of what to expect from the stage production since through background research I found that the actor playing Merrick does not use makeup or prosthetics to recreate Merrick’s deformities, instead he uses his body to convey to the audience Merrick’s physical maladies. That being said, I honestly did not miss the prosthetics because the cast and crew of The Elephant Man at Ephrata Performing Arts Center does such a fantastic job of drawing the audience into this story, that the audience can easily envision Merrick’s malformations in their minds eye. If you have never seen The Elephant Man on stage, I highly recommend experiencing this extraordinary story live, and EPAC does a remarkable job with this production. The Elephant Man at Ephrata Performing Arts Center is one of the most fascinating and moving shows on stage this September.

The Elephant Man written by playwright, Bernard Pomerance, debuted on Broadway in 1979, and ran until 1981, since then the play has seen revivals in 2002 and 2014.  The play takes place in Victorian era London, and tells the story of Joseph Merrick, who is referred to as “John,” within the play. Merrick was born severely disfigured, and is eventually taken in by a circus to form part of their “freak show.” The story of The Elephant Man revolves around the story of how a doctor, Frederick Treves, takes in Merrick, and devotes himself to taking care of Merrick as well as studying his disease. The play follows Merrick’s trials and successes as he tries to live a life of dignity and be seen as more than “side show” entertainment.

Director, Michael Swanson, delves into the heart of this story, and needs commended for his sophisticated direction. Playing the role of John Merrick is Tim Riggs. Riggs is incredible in this difficult role. Riggs evokes the malformations of Merrick’s body through his expressive body language, and Riggs displays incredible physical control as he keeps his body crooked throughout most of the play to suggest the difficulties of Merrick’s bearing. This performance by Riggs is stunning both physically and emotionally. Another striking aspect of Riggs’s performance is the way in which he handles the dichotomy of expressing Merrick’s slurred speech while still maintaining an understandable dialog for the audience. Riggs does this perfectly, and his monologue in act two directed towards his former keeper, the side show manager, was phenomenal, and one of the more moving moments in the production. Playing the role of Dr. Frederick Treves is Gene Connelly. The aspect that I loved about Connelly’s performance is that he begins the show as a good-hearted and sincere man, but as the show develops he becomes increasingly frustrated with society, and Connelly reveals Treves depth and exasperation. At the end of act two Treves has a powerful speech that shows his frustration with society, and Connelly delivers this with grace and passion – it is an incredible moment in this play. Megan Riggs plays Mrs. Kendal, an actress who befriends Merrick. Megan Riggs is exquisite in this role, as she offers the perfect combination of humor and kindness. Riggs skillfully conveys her character’s empathy and ability to see beyond Merrick’s exterior and appreciate the kind and intelligent man inside. There is a line that Merrick says to Kendal, “Sometimes I think my head is so big because it is so full of dreams.” This moment in the show is heart rending, and Tim Riggs delivers it with such gentleness and Megan Riggs reacts to this with such emotion that this moment captures the heart of the production. Evan Cooper plays Carr Gomm, the hospital administrator. Cooper gives a successful performance and superbly captures the practicality of this character. John Kleimo portrays a variety of characters in this play, but his portrayal of Ross, the greedy and brusque side show manager was exceptional. Kleimo gives a rough edge to this character and the interactions between Ross and Merrick are some of the more intense moments of the show. Lastly, I need to mention Joseph Brice who also plays several characters. Brice gives an intense performance as the manager of the Pinheads, and he is forceful as he portrays the exploitation that was the norm in side shows of this time period.

In addition to the stellar performances of the cast, I also need to mention the behind the scenes crew because they also added to this outstanding show. First, Jordan Janota needs mentioning for designing the incredible set. The set exhibits four panels, these four panels start the show displaying posters for side show acts, the panels imagery change as the scene changes, and the projections on these panels help identify location and allow scenes to smoothly transition from one to the other. Additionally, the use of lights, designed by Richard Wold-Spencer helps emphasize certain aspects of the scenes and assist in helping the scene transition.  Lastly, Mercedes Mercado needs commended for her costume designs, the costumes in this production are representative of Victorian England, especially the costumes for Mrs. Kendall.

The Elephant Man runs at Ephrata Performing Arts Center through September 19, 2015. For more information and tickets visit their website at www.ephrataperformingartscenter.com or call the box office at 717-733-7966.

Final Thought: For powerful and exquisite performances by a talented cast be sure to see The Elephant Man at Ephrata Performing Arts Center. This play is moving and intelligent, and an excellent production.