EPAC Presents a Compelling and Complex THE HEIRESS 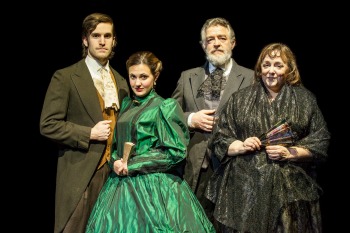 Ephrata Performing Arts Center opens their 2016 season with the emotional drama The Heiress. This play is based on the Henry James novel, Washington Square. The play takes place in 1850 in Washington Square. The story revolves around Catherine Sloper, and her father Doctor Austin Sloper. The production at EPAC brings this well-known story to life on their stage with grace. The Heiress, under the direction of Edward R. Fernandez brings out the complexity of the characters, and this cast superbly makes the audience feel empathy for the emotional state of the characters.

The Heiress is a 1947 play adapted from the Henry James novel by Ruth and Augustus Goetz. The play tells the story of Austin Sloper a prosperous New York physician and his daughter, Catherine. Catherine is of marrying age, however, she is shy and lacks self-esteem, which are qualities that young ladies of the marrying age should not possess in New York elite society. There is constant tension between Catherine and her father. This play opened on Broadway in 1947, and has had four Broadway revivals, most recently in 2012 starring Jessica Chastain in the role of Catherine.

The story of The Heiress relies heavily on character development, especially in the case of the actor playing the role of Catherine. Catherine is the character that evolves the most in this play, and it is necessary for her to be able to portray this transformation gradually and with ease. Megan Riggs is stellar in this role. Not only can audiences see her recoil at the comments from her father, they can see her become flustered by her father’s stares and actions towards her. Riggs brings forth the innocence of this character as she is constantly vying for her father’s approval. As the show progresses, so does Catherine. Riggs depicts Catherine’s change in character from a mild-mannered dutiful into someone who is master of her own fate, and also someone who loses part of herself in this evolution. Kenneth Seigh portrays Dr. Austin Sloper, who is a respected member of New York’s aristocratic society and who desires his daughter to embody the qualities necessary to be an accepted part of this society. Seigh is a commanding presence onstage as he personifies this character who, at times, is frigid towards Catherine. There is a particular scene in which Dr. Sloper blames Catherine for her mother’s death. Seigh is perfect in this scene as audiences can see the anger and animosity he feels towards Catherine.  In addition, the way Seigh and Riggs react to each other onstage is impressive to watch. They demonstrate to the audience exactly how strained their relationship is simply through the way they look and react to each other. Elizabeth Pattey portrays, Lavina Penniman, a widower and Dr. Sloper’s sister who is also staying in his home. Pattey is brilliant in this role, as she seems to have her niece’s best interest at heart, and desperately tries to make sure she marries. Pattey shines in her ability to reflect exactly what the audience is feeling throughout the show with her facial expressions and body language. This is exceptionally well done in the last scene. Brain Viera plays Morris Townsend, a penniless young man who wants to marry Catherine. Viera is charming and brings out the determination of Morris to marry Catherine. He also capably balances the charm of Morris with the transparency of his intensions in a way that audiences will defend and doubt his motives, which is not an easy task. Rounding out this cast is Andi Jo Hill who plays Maria, the Irish maid. Hill gives a spirited performance in this role, and she adds levity to the scenes that are complex and emotional.

I also need to mention the remarkable set for this production. This set is designed by Mike Rhoads and assisted by Jill Kurtz. The set represents an elegant mid-nineteenth century town house that is so detailed it almost represents a character in itself. The costumes by Shelby Feeney are equally as detailed and range from Lavinia’s mourning dress to the Catherine’s exquisite gowns that become grander as the show progresses. Kyle Kirkpatrick serves as the Sound Designer and Mike Wiltraut is the Lighting Designer. In addition, Zack Smith is the Music Supervisor.

The Heiress runs at EPAC through March 26, 2016. For more information and tickets visit their website at www.ephrataperformingartscenter.com or call the box office at 717-733-7966.

Final Thought: The Heiress at Ephrata Performing Arts Center is a powerful portrait of an emotionally damaged woman who frees herself from her desire for her father’s approval. This cast is exquisite as they bring this complex story to the stage with grace, and bring out the intricacy of these characters.