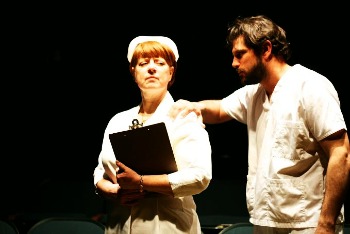 Ephrata Performing Arts Center opened their 2014 season with One Flew Over the Cuckoo’s Nest. This show is a production that fans of the novel or the film will immediately warm to as they experience this raucous group of familiar societal misfits. This production, under the direction of Timothy Riggs, is thought provoking and has moments that will make audiences laugh. One Flew Over the Cuckoo’s Nest at Ephrata Performing Arts Center is a well-acted production that will leave audiences considering their views of psychiatric practices, institutionalization and the imposition of societal norms.

One Flew Over the Cuckoo’s Nest, is based on Ken Kesey’s 1962 novel of the same name. Dale Wasserman wrote the stage adaption of this play and it opened on Broadway in November 1963, and ran for eighty-two performances. The movie, which is also based on the novel, was released in 1975. The play centers on Randle P. McMurphy, a man who hands himself over to a mental health facility to escape jail time. McMurphy forms a bond with the other patients in his ward, and finds that these men are being lorded over by the vindictive head nurse, Nurse Ratched. McMurphy quickly establishes himself as being high-spirited, and he breathes life into the other patients by instigating conflict between himself and Nurse Ratched. Although One Flew Over the Cuckoo’s Nest takes place in the 1960s, a time when the mental health system in America was under criticism, there are broader themes about humanity that are timeless.

The cast of this show has the difficult task of not playing their characters over the top, so that the audience becomes invested in the characters 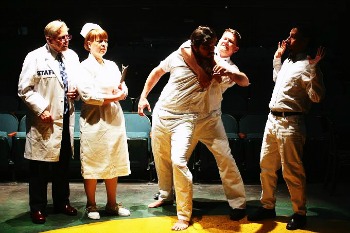 and their stories. Every member of this cast portrayed their character in such a way that was endearing to the audience; the soul of the characters came through and allowed the audience to enjoy the humor of the situations, but to also experience empathy for the characters plight. This cast found a balance in their roles that is not always easy to do. In the role of Randle P. McMurphy, a man who is a rebel, is Christopher Michael. Michael is masterful as the rebellious McMurphy, and he adds charisma to this character. Playing Chief Bromden is Evan Cooper. The Chief has monologues that are full of vigor and emotional imagery. One of the best parts of this production are the late night scenes in which McMurphy and the Chief bond, the interaction between these characters is moving. Bob Breen plays Dale Harding, the leader of the patients. Breen successfully establishes his character as cowardly in the beginning and evolves into a person who finds quiet resolve to stand up for his fellow patients. Kevin Fennell portrays the innocent Billy Bibbit, the stammering teenager. Ferrell captures this young man’s anxieties perfectly. Playing the role of Nurse Ratched is Susan Kresge. Kresge wonderfully plays this commanding character, and has the ability to make the audience dislike this character. The final battle between McMurphy and Ratched is a powerful scene and demonstrates the ability of these two fine actors. The one criticism I have of this production is that the beginning of the first act is rather slow to develop, it takes a while for the plot to move forward as we are introduced to the many characters. However, this fault lies with the script and not the actors or the director, and these scenes are necessary for character development. That being said, the entire cast of this show is dynamic and handled the comedic and dramatic moments superbly.

One Flew Over the Cuckoo’s Nest runs at the Ephrata Performing Arts Center through April 5, 2014. For more information and tickets visit their website at www.ephrataperformingartscenter.com or call the box office at 717-733-7966.

Final Thought: One Flew Over the Cuckoo’s Nest is a show that grips at the soul and provides ample introspective and thought provoking themes. The show has an energetic cast that will leave the audience stunned at its emotional impact.