Emotions Run High in People’s Light’s ALL MY SONS 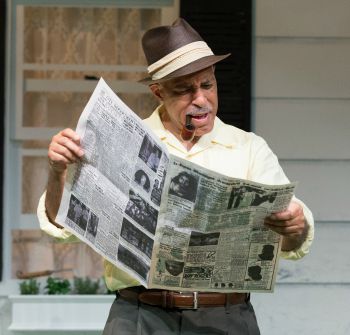 Anytime I go to see a play by Arthur Miller I know it is going to pack an emotional punch. His plays are always affecting, and I leave the theatre with so much to discuss and think about after the final curtain. That being said, the current production at People’s Light, All My Sons, is an emotional ride, and this particular production is incredibly well done. This particular production at People’s Light is an undeniably powerful play and contains intense and authentic performances by the entire cast.

All My Sons is a 1947 play written by Arthur Miller. The show opened on Broadway in January 1947 and closed November of that same year. The play tells the story of prosperous factory owner, Joe Keller. Joe, and his wife, Kate, live comfortably in a suburban American neighborhood with their son, Chris. However, Joe is hiding a secret, and when that secret comes to light it will have devastating consequences for the entire Keller family.

This current production of All My Sons is directed by Kamilah Forbes, who directed Fences last season at People’s Light and has assembled many of the same members of that cast. The power of doing Miller’s play with an African-American cast is that not only does it bring to the forefront Miller’s themes in this play, but it also brings to life a post-World War II culture where there was an increasing number of African Americans graduating from college, a growing middle class, and a migration to the suburbs. In Forbes’s notes in the program she writes, “In our production, we intersect [Miller’s] story with a conversation about being Black in America.” That is exactly what is achieved, and it is a powerful production of All My Sons. 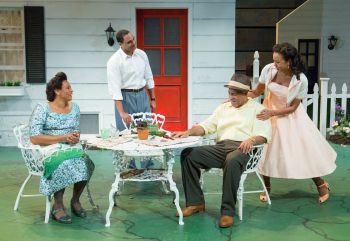 beginning of the play, appears to be charming as well as a loving father and husband. However, as the emotions run high in act two, he grips the audience with his anger and fear of what will happen to him and his family. Joe’s wife, Kate, is played by Melanye Finister. Genet and Finister have remarkable chemistry onstage. What I liked about Finister’s portrayal is that Kate transforms from a kindly mother figure to being a strong willed and angry voice of reason. There was an agreeable nature and almost desperation that Finister brought forth in her performance. Playing Kate and Joe’s son, Chris, is Ruffin Prentiss. Prestiss’s Chris radiates with earnestness through most of the play. However, there is an exceptional scene in act two where Chris and his father have an argument, and this emotional explosion between these characters is perfectly portrayed. Margaret Ivey plays Ann, the former girlfriend of Chris’s brother who is presumed dead. Ivey enters the play as a breath of fresh air, full of hope and innocence. Despite all the heartbreak Ann has encountered, Ivey keep her character innocent. The scenes in act one, in which Ann is full of anticipation for Chris’s forthcoming proposal, and Chris is unsure of how to propose are delightfully awkward. Prentiss and Ivey capture the innocence of young love. Brian Anthony Wilson and Joilet Harris portray Dr. Jim Bayliss and his wife, Sue, the neighbors of the Kellers. Wilson comes across as a kind and optimistic man. Harris is full of energy and spirit in this role, and in act two her character reveals her perceptiveness of her husband.  Akeem Davis plays Ann’s brother, George. Davis appears on stage slouching and disheveled, and he brings a strong performance. What struck me about Davis’s performance is that he initially appears resentful towards Joe, and then he wavers and seems to enjoy the Kellers’ company, and then turns once more towards anger. Davis capably reflects these changes through his facial expression and body language, and he gives the audience a remarkable performance.

All My Sons runs at People’s Light through October 4, 2015. For more information and tickets visit their website at peopleslight.org or call their box office at 610-644-3500.

Final Thought: All My Sons is a gripping and emotional ride. This production at People’s Light is one that has exceptional direction and a compelling cast. It is a show that will affect audiences, and one that will remain with the audience long after they leave the theatre.

This review is excellent and spot on. What a rich experience watching this play was!