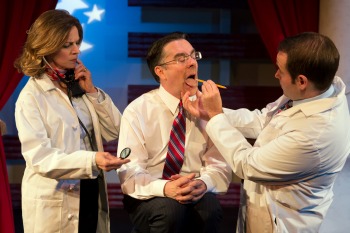 At the helm of this production is the illustrious Tony Braithwaite. Braithwaite is a co-creator (along with Tracie Higgins and Will Dennis,) directs and is an actor in the production.  In this production Braithwaite channels a gamut of Presidents, past and present, and he glides easily from one presidential impersonation to another. This show is a fine example that Braithwaite is an exceptional storyteller, and audiences respond positively to Braithwaite’s skills. It is always delightful to see Tracie Higgins on Act II’s stage. Higgins is hilarious as she captures the caricature of Hillary Clinton brilliantly. One of my favorite parts of the show involves how the troupe pokes fun at Clinton’s presentation style. Higgins creates a musical montage that is exceptional while staying true to the Clinton character. Will Dennis provides a ton 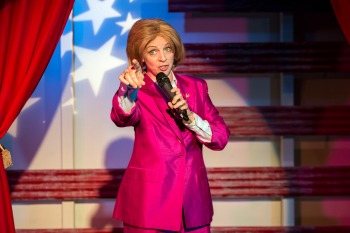 of energy onstage. There is a portion of the production where Dennis harnesses his comedic energy to its utmost while sprinting around the theatre as he impersonates an entire press core. Rounding out the cast is Owen Robbins. Robbins offers “politics from the piano,” which provides a veritable amuse-bouche of political facts throughout the night’s entertainments. In addition, Robbins provides sublime accompaniment throughout the show.

Another aspect of Electile Dysfunction that deserves mentioning is the audience participation portion of the show. The audience participation segments are a staple to many of Braithwaite’s shows. This particular segment of this show pays homage to the Broadway musical, Hamilton. It is by far my favorite improvisation segment I have seen on Act II’s stage. It also demonstrates the comedic brilliance of Braithwaite, Higgins and Dennis.

I would be amiss if I did not mention the artistic team behind Electile Dysfunction. Adam Riggar designed the politically themed set. Patrick Romano is a co-writer and assistant to the director. Andy Shaw serves as the Lighting Designer and Constance Case is the Costume Designer. In addition, Video Production was provided by PFW Media. 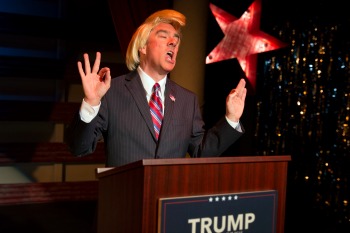 Electile Dysfunction runs at Act II Playhouse through October 9. 2016. For more information and tickets visit their website at www.act2.org or call the box office at 215-654-0200.