Dutch Apple’s MENOPAUSE THE MUSICAL is Full of Laughs 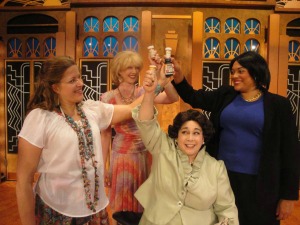 Grab your sister, mother, daughter, or friend, and go to Dutch Apple Dinner Theatre for a show that celebrates women and is hysterical. Menopause the Musical is the latest show to grace the stage at Dutch Apple Dinner Theatre, and it is a show full of hilarity and charm. The show takes place at Bloomingdales in New York City, where four women meet fighting over a black brassiere. These women, who are from very different walks of life, discover they have one thing in common – menopause. These women bond throughout their day at the department store talking and singing about topics such as chocolate cravings, heat flashes, trouble sleeping, etc.  Menopause the Musical is a show full of great music and comedy that will have audiences laughing the entire ride home.

Jeanie Linders wrote Menopause the Musical. She wanted to write a musical that appealed to menopausal women, whom she felt were neglected by the mainstream market. The music for the show parodies popular songs from the 1960s, 70s and 80s. The women of the show entertain audiences with the songs from these decades, and audience members clap along and tap their feet to the well-known music. The music from this show is fun and energetic, and makes for a very entertaining evening.

The four women in this show are an earth mother, a soap actress, an Iowa housewife and a professional woman, and they all have menopause in common. Megan Opalinski plays the Earth Mother, and she is animated in this role. She has audiences laughing with her renditions of “Stayin’ Alive” and “The Lion Sleeps Tonight.” Whitney Hayes portrays the Professional Woman. Hayes has the strongest vocals in this show and one of her best was “I Heard it through the Grapevine.” Erin Fish portrays the Soap Star. She is humorous and delightful in the show. Rounding out this wonderful cast is Eleonore Thomas who plays the Iowa Housewife. Thomas is comical in this role, and in many scenes she had the audience bursting with laughter. Thomas along with Hayes have one of the best duets in the show, “The Great Pretender.” The vocals in this duet are strong and energetic. Men and women alike will enjoy this hilarious show, thanks to the great talent in this production as well as the creative lyrics of the songs.

Menopause the Musical runs at Dutch Apple Dinner Theatre through October 5, 2013. For more information and tickets visit their website at www.dutchapple.com or call their box office at 717-898-1900.

Final Thought:  Menopause the Musical is energetic and entertaining. It will have audiences laughing for days after the show. Do not miss this show, it will make a hilariously fun night out for any group.

Saw the show with my daughter yesterday - it was hilarious! We

thoroughly enjoyed ourselves and would recommend the show to

woman and men both! The food was delicious and the service was

super! Thanks for a fantastic time ! We loved it!

Paulyne, I am so glad you and your daughter enjoyed the show and your time at Dutch Apple. And thank you for taking the time to leave a comment about your experience at the theatre.