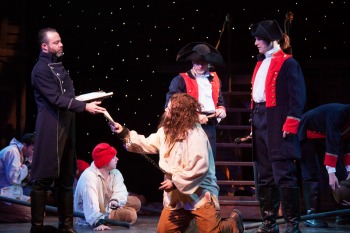 Putting on a production of Les Misérables can be a difficult task. This show is an audience favorite and most audience members that see this show have seen it before, they know all the music and they know many of the highlights of the show. In addition, people have their favorite songs, characters or scenes. When a theatre puts on Les Misérables there is always the possibility that it will not live up to the expectations set by any other production someone may have seen of this particular show. However, the production of Les Misérables at Dutch Apple Dinner Theatre is outstanding, it took me back to the first time I saw the show, and it made me fall in love with this musical all over again.

Les Misérables tells the story of love and loss amid the Paris Uprising of 1832. Alain Boublil and Claude-Michel Schönberg's Tony Award-winning musical is based on the Victor Hugo’s French historical novel of the same name. The musical takes place in 19th century France where the paroled French prisoner, Jean Valjean, seeks redemption after being imprisoned 19 years for stealing a loaf of bread to feed his starving sister’s child. Javert, a relentless constable, purses Valjean for decades after he broke his parole. The score for this show is beautiful, as it tells the story of the Paris Uprising of 1832 and of a man who is searching for redemption.

Director, Brian J. Enzman, has assembled a cast that is strong, forceful, and full of vitality. I was truly impressed by the attention to detail that 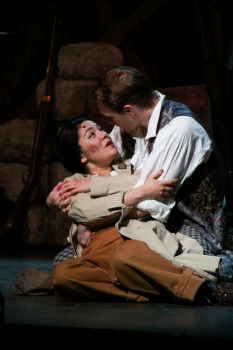 went into this production from the costumes to the props to the staging. Jacob Waid plays Jean Valjean, and he is impressive in this role. Waid shines in this role, and his vocals in “Bring Him Home” are emotional and moving. Adam Clough portrays Javert. Clough has a presence onstage, which is needed in this role. In addition, his performance in “Stars” was breathtaking and moving, Clough gave this song intense emotion. I also need to mention that “Javert’s Suicide” scene was powerful, and one of the best renditions of this scene I have seen anywhere. In the role of Fantine is Amanda Kuchinski. Kuchinski’s performance in “I Dreamed a Dream” is full of sentiment, and is outstanding. Playing the Thenardiers are Andrea Spencer Christensen and John Anker Bow. The number, “Master of the House,” was perfectly performed, and added the right amount of humor as Christensen and Anker played up the incorrigible aspect of these roles. The role of Epinone is played by Maya Naff. Naff’s performance is moving and her solo in “On My Own” is beautifully rendered. Teresa Whitt plays Cosette and Nick Lerew portrays Marius. These two fine actors are strong in their roles. The song between Epinone, Marius and Cosette, “A Heart Full of Love,” is heart rending and full of sublime vocals. Playing Enjolras, the leader of the student revolutionaries, is Alex Mace. Mace beams with magnetism, and he is impassioned especially in the song, ““Do You Hear the People Sing?” In the roles of the three young characters in the show the night I attended the performance are Allie Hynoski as Young Cosette (alternates this role with Piper Sobon and Kaitlyn Wise), Olivia Rose Pituch as Young Eponine (alternates with Zoe Caloviras and Moriah Kreiser) and Cody McSherry as Gavroche (alternates with Henry Greiner and Jackson Leherr.)  These three fine young actors do a fantastic job and project innocence and  poise during their scenes.

Les Misérables is an epic production, and Dutch Apple did an outstanding job with this show. Les Misérables runs at the Dutch Apple Dinner Theatre through June 13, 2015. For more information and tickets please visit their website at www.dutchapple.com or call the box office at 717-898-1900.

Final Thought: Les Misérables at Dutch Apple Dinner Theatre is an exceptional production of this show. It is a reminder of why so many people love this musical; this production will entrance audiences with the music, characters and moving story of the show.