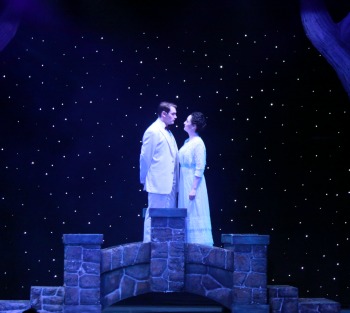 Meredith Wilson’s The Music Man is one of those shows that have a great story and a wonderful score, and it is a musical that audiences love and have enjoyed in many renditions. The show is a delight from start to finish, and the characters are enticing and entertaining. The Dutch Apple’s production of The Music Man is full of heart, and has a great cast, wonderfully executed musical numbers and audience members will leave the theatre with a smile on their face and a fond tune in their head.

The Music Man originally opened on Broadway in 1957. Meredith Wilson wrote the music, book and lyrics for this show, and it is based on a story by Wilson and Franklin Lacey. The Music Man tells the story of Harold Hill, a a fairly unscrupulous salesman who lands in River City, Iowa, and tries to con the town into believing that he is a boys’ band organizer/leader. Hill sells band instruments, music books, and uniforms to the naive townsfolk, but plans to skip town with their money without giving any music lessons. The show won five Tony Awards including best musical, and won a Grammy for Best Original Cast Album. The show’s success led to a 1962 film adaption starring Robert Preston and Shirley Jones. There also was a 2003 television remake starring Matthew Broderick and Kristin Chenoweth.

The one thing I really liked about the production of The Music Man at Dutch Apple Dinner Theatre is that under the direction of Brian J. Ezman, 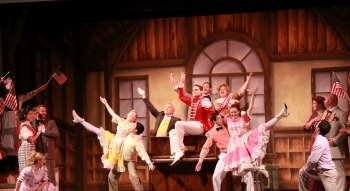 this cast did not try to emulate the iconic performances from the show, but made the characters and the show their own. DJ Canaday plays the role of Harold Hill, and I applaud him for his performance. He played this character with a vaudevillian flair, with a bit of charm. As much as I thought the chemistry between Canaday and Colleen Gallagher (Marian Paroo) was strong, my favorite number of Canaday’s was “The Sadder but Wiser Girl.” This song performed with Victor Lagarreta who plays Marcellus Washburn, is full of pizazz and is great vocally. Playing the role of Marian Paroo, the town’s librarian and piano teacher is Colleen Gallagher. Gallagher has the right combination of kindness and toughness, and her vocals in “My White Knight” are beautiful and strong. Playing the roles of Mayor Shinn and his wife, Eulalie are Rob Summers and Molly Tower. Both these actors give fine performances, and they have the audience laughing with their antics throughout the show. Richard Gonzalez and Jackson Leherr share the role of Winthrop, Marian’s shy younger brother, these are excellent young actors, and give a great performance in “The Wells Fargo Wagon.” There are grand company numbers in this show such as “Seventy-Six Trombones” and “Shipoopi.” These numbers are full of energy and will not disappoint. I also want to mention that there is a “grand” finale after the curtain call, and although I do not want to ruin it for those who have not seen the show, I was impressed by it, and it is something that I have not seen done before.

The Music Man at Dutch Apple Dinner Theatre runs through August 9, 2014. For more information and tickets visit the website at www.dutchapple.com or call the box office at 717-898-1900.

Final Thought:  The Music Man at Dutch Apple is a must see for the summer from the wonderful cast to the wonderfully executed numbers this is one show that will not disappoint. This is a show that is endearing and enduring for the American theatregoer and this production is one that audiences will be sure to love.