Dutch Apple Dinner Theatre Presents a Captivating CRAZY FOR YOU 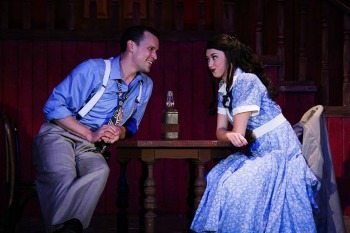 The latest production at Dutch Apple Dinner Theatre, Crazy for You, is full of satisfying musical entertainment. This musical comedy has it all: a smart book, music by Gershwin, brilliant choreography and a cast brimming with talent. This show succeeds at giving the audience a good time.  Crazy for You is meant to entertain and make audiences smile, it is not a deep show that will keep audiences thinking once the show is over – it will however keep the audience humming a few Gershwin tunes for number of days to follow. If you have not seen Crazy for You or it has been a while since you have seen the production, go see this show at Dutch Apple Dinner Theatre, it is glamorous, charming and just a good time.

One of the things that makes this musical so successful is the solid book by Ken Ludwig and the music and lyrics by Ira and George Gershwin. Crazy for You won the Tony for Best Musical in 1992. The show is about Bobby Child who wants to dance onstage, but his mother wants him to give up his dreams and go to work for her in her bank. Bobby ends up in a small town in Deadrock, Nevada, where he meets Polly Baker, who he falls in love with at first sight. What follows is a show full of mistaken identities, plot twists and of course a love story. Crazy for You has energetic dance numbers, powerful vocals, and is a remarkably good time.

In the role of Bobby Child is Jake Delaney. Delaney is delightful and shows off Bobby’s passion for dancing. Delaney charms the audience from 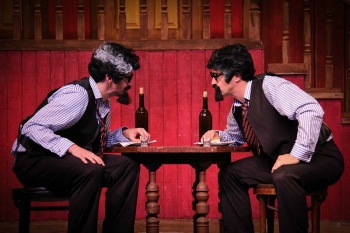 the first time he appears on stage, and he has solid vocals throughout the show. Emily Grace Tucker portrays Polly Baker, the gal who lives in Nevada and who is trying to save her father’s theater. Tucker shines as Polly, and she belts “I’ve Got Rhythm” with gusto. In addition, her dance number, “Shall We Dance?” with Delaney (Bobby) is beautifully choreographed, and both these fine actors are dynamic in this song. Millicent Hunnicutt is perfectly haughty as Bobby’s so-called girlfriend from New York, Irene. Galloway Stevens plays the protagonist, Lank. Stevens has a bold presence onstage, and excellently portrays the difficult role that must be both comedic and menacing at the same time. Playing Bela Zangler, the New York producer of the Zangler Follies is Craig Smith. Smith is hilarious throughout the show, but particularly in the song, “What Causes That?” In order for Crazy for You to be successful, it must have a strong ensemble. The production at Dutch Apple has an energetic ensemble that has a mix of cowboys and showgirls who are amazing dancers. Lastly, I need to applaud the director of this production, Dean Sobon, as well as choreographer, Samantha Hewes, whose thrilling choreography made this an exceptional production.

The creative team also need recognized for this delightful production. Robert Andrew Kovach serves as the Scenic Designer, John P. White is the Costume Designer, Lighting Design was done by Russell A. Thompson, and Andrew Zaplitny is the Sound Designer. Additionally, Danielle Barnes is the Musical Director.

Crazy for You runs at the Dutch Apple Dinner Theatre through November 8, 2014. For more information and tickets visit their website at www.dutchapple.com or call the box office at 717-898-1900.

Final Thought: Crazy for You at Dutch Apple is a show that is enchanting, and has outstanding choreography and performances. This is a show where the people onstage are having as much fun performing as the audience does in watching the show.