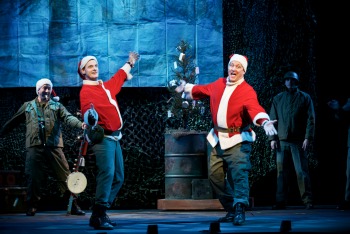 The Fulton’s production of White Christmas is nostalgic, beautiful and glamourous. If there is any show that is full of Christmas cheer, it is definitely this production of White Christmas. This show is one of those shows that is full of theatre magic. Audiences can sit back and relax, forget about all the stress in their lives for a few hours, and be entertained by a magnificent cast.

What I love about the holiday shows at the Fulton Theatre are that they are a mix of entertainment and tradition. White Christmas is no exception to this as it is a hearty dose of the warm and sublime feeling one gets during the holidays. The musical version of White Christmas is based on the 1954 film of the same name. David Ives and Paul Blake wrote the book with music and lyrics by Irving Berlin. The show tells the story of two army buddies during World War II, Bob Wallace and Phil Davis, who end up in show business. Bob and Phil meet a duo of singing sisters, Betty and Judy Haynes, and follow them to an inn in Vermont that just happens to be owned by their commanding officer, General Henry Waverley. Due to the unseasonably warm weather in Vermont, Bob, Phil, Betty and Judy decided to help out and bring business to the struggling inn. White Christmas at the Fulton Theatre is full of laughter, a dazzling score, and magnificent song and dance numbers.

White Christmas, directed and choreographed by Marc Robin, is sentimental and nostalgic, and Robin’s graceful choreography should not be 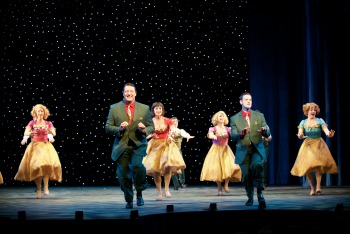 missed. Curt Dale Clark plays Bob Wallace. Clark begins the show strong with his jolliness alongside Brian Shepard as Phil Davis in “Happy Holiday.” In addition, Clark ends act one with an energetic dance number, “Blue Skies.” Although I enjoyed Clark immensely in this number, the highlight for me was a tender moment between Bob and young Susan (played by the talented Caroline McEligot) during the song “Count Your Blessings.” Brian Shepard plays Phil, Bob’s Army buddy. Although Shepard is charming throughout the production, he and the dazzling Vanessa Sonon, who plays Judy Haynes, steal the show at the beginning of act two in “I Love a Piano.” This number is energetic and full of all the mirth that belongs in this show. Playing Judy’s sister, Betty, is Tari Kelly. Kelly’s vocals are strong especially in “Love and the Weather.” Joseph Dellger plays General Henry Waverley. Dellger strikes the right balance of dedicated soldier and warm-hearted grandfather. Sue Cella shines as Martha Watson, the loyal assistance to General Waverly at the Inn. Cella adds humor and makes the role her own. Andrew Kindig plays Mike Nulty the overworked and frustrated stage manager of Bob and Phil’s new show. Kindig consistently obtains laughs with his antics. Balancing out the overworked stage manager is a handyman at the inn who takes life at a very gradual pace, Ezekial, capably played by Fran Prisco. Prisco will have audience laughing with his slow-paced movement. There is one more song I need to mention in this production, and that is the song “Snow.” This song, set on a train ride to Vermont, is the vocal highlight of the show performed by Clark, Shepard, Kelly, Sonon, Prisco and Jessica Dey. White Christmas is a show that will instill in the audience a sense of holiday cheer, and provides for an ideal way to celebrate the holiday season.

White Christmas runs at the Fulton Theatre through January 4, 2015. For more information and tickets visit their website at www.thefulton.org or call the box office at 717-397-7425. 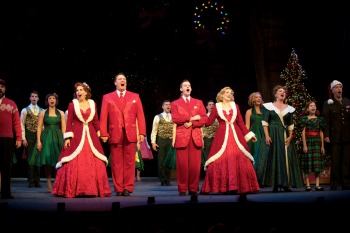 Final Thought: White Christmas at the Fulton Theatre is a festive feel-good musical that should not be missed this holiday season. The production is dazzling, nostalgic, and beautiful, as well as has graceful choreography and wonderful performances. This show will inspire audiences with a sense of holiday spirit.