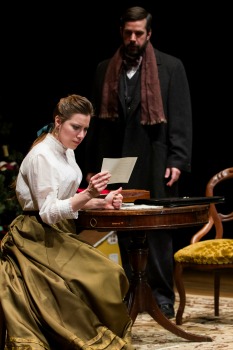 The latest play onstage at Delaware Theatre Company is Nora. Nora is a play by Igmar Bergman and based on Henrik Ibsen’s A Doll’s House. Bergman streamlined the play by removing minor characters from Ibsen’s original script, such as the servants and the children, and creates a play focused directly on the main characters Nora, Thorvald, Dr. Rank, Mrs. Linde and Krogstad, and the conflicts in their lives. The production of Nora at Delaware Theatre Company is elegant, poignant and engaging.

According to the notes from the director of Delaware Theatre Company’s production, Michael Mastro, Bergman “brilliantly distilled the action of Ibsen’s play, both narratively and emotionally, so that the events unfold in a leaner fashion and with greater momentum.” A Doll’s House was controversial when it was first performed in 1879. However, even today the story remains relevant as it comments on women’s role in society. The play, Nora, takes place in 1898 in Norway. The show tells the story of Nora and her husband, Thorvald, and the expectations and roles of women in the late 19th century.

Playing the lead role of Nora, is Kim Carson. Carson is elegant and bold, and perfect for this part. Carson at first appearance is carefree and naïve. She transitions throughout the show from a woman who is treated like a fragile doll to a self-determinant person with a desire to better understand herself, and she refuses to play the role expected of her or submit to her husband’s demands. Thorvald, Nora’s husband, is played by David Arrow. Thorvald is narcissistic, emotionally cold and controlling. In seeing this play, I was reminded how the character Thorvald infuriates me, which is a compliment to Mr. Arrow. His performance was strong as he portrayed the authoritative husband who treats Nora as his possession whose purpose is to please him and impress others. Kevin Bergen gives a fine performance as Dr. Rank, a family friend who is dying. Dr. Rank is the opposite of Thorvald, he is warm and sees Nora beyond her role as wife and mother. Susan Riley Stevens plays Mrs. Linde, a childhood friend of Nora. Mrs. Linde can be a static character, but Stevens made this character intriguing especially in the scenes with Krogstad. Chris Thorn plays Krogstad, the displaced banker who threatens to reveal Nora’s secret. Thorn gives a remarkable performance as he gives Krogstad the right amount of desperation and peril. Nora at Delaware Theatre Company is a magnificent production. This show speaks eloquently about the roles of 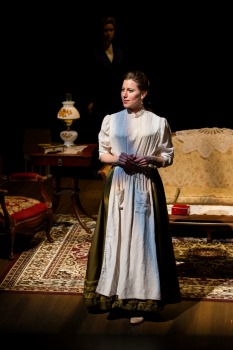 women in a male dominated society in the 19th century.

I also need to mention the artistic team for this production. Alexis Distler designed the beautiful set. Esther Arroyo designed the stunning costumes. In addition, Christopher J. Baily is the Lighting Designer and Scott Killian is the Sound Designer.

Nora runs at the Delaware Theatre Company through February 22, 2015 for more information and tickets visit their website at www.delawaretheatre.org or call the box office at 302-594-1100.

Final Thought: Nora at Delaware Theatre Company is a beautifully written play that is elegantly performed and wonderfully directed. This production will engage many conversations long after the play is over.