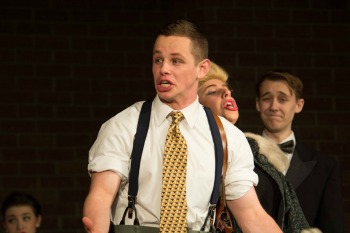 Watching the production of Curtains at St. Joe’s Prep I was reminded that the Cape and Sword Productions are some of the best pieces of theatre I see. I say this with sincerity. I sat in their theatre and was struck by how strong this production was, every member of the cast brought all their energy to the stage, the sets and costumes were spectacular and the choreography was stunning. I was so swept away in the show that I had to remind myself I was not watching professional actors, but a group of talented high school students. Tony Braithwaite’s smart direction makes this show fast-paced and exciting.  Cape and Sword’s production of Curtains is an energy packed production that will keep audiences entertained with its spectacular musical numbers and top-notch performances.

Curtains is a 2006 musical with a book by Rupert Holmes, and a score by the team of John Kander and Fred Ebb. Both Fred Ebb and the original author-conceiver, Peter Stone, died before the show was completed, so Kander and Holmes assumed the responsibilities after their deaths. Curtains is set in 1959 at the Colonial Theatre in Boston, Massachusetts. At this theatre a show, “Robbin’ Hood,” is being performed and it is obvious that the star of the show, Jessica, cannot sing or act and is ruining the production. After the final bow one night, Jessica dies and it is eventually determined that she was murdered, and everyone in the company is a possible suspect. What ensues is a musical comedy whodunit, and a show that pays homage to "show people."

Before I begin with the descriptions of individual performances, I need to say that this cast was phenomenal. I was impressed by not only the 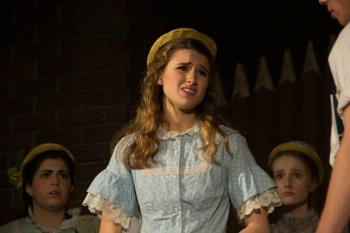 amount of talent on the stage, but how each person brought an enormous amount of energy and enthusiasm to their roles. Playing the role of Lieutenant Frank Cioffi, the detective who is set to solve the mystery of Jessica’s murder and who also has a soft spot for musical theatre, is Tom Koenig. Koenig begins strong with his surprise entrance, and he keeps up this momentum throughout the entire show. What I loved most about Tom Koenig’s performance is that he glides easily from humorous moments to emotional ones. In addition, I thought his performance in the number “Show People,” along with the rest of the company was outstanding. Elena Christen portrays Niki Harris, an innocent young actress who is the reason that Lieutenant Cioffi is so distracted from his work. Christen and Koenig have great chemistry, and their duet together, “A Tough Act to Follow,” is a sweet number. These two fine performers pull off this grand romantic fantasy number with ease. Mac Riga plays Christopher Belling, the shows textbook self-important director. Riga is amusing in his portrayal of this director with an oversized ego. Aaron Fox, the composer of “Robbin’ Hood,” is portrayed by Richard Fusco. Fusco comes across as a character who is focused on his music, and his song “I Miss the Music,” is an emotional ballad in which Fusco gives a brilliantly moving performance. Emma Barrera plays Georgia Hendricks, the lyricist turned reluctant star of “Robbin’ Hood.” Barrera adds a depth of sentiment to this 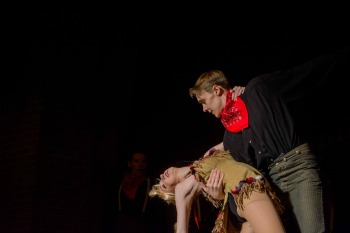 role, which makes her a more complex character. Collen Boyle plays Carmen Bernstein, the show’s co-producer and driving force behind “Robbin’ Hood.” She nails her number in the beginning of the song “Show People” convincing the actors that “the show must go on.” Paul Koenig portrays Oscar Shapiro, the sole investor of the show, and he provides a compelling performance as this timid character. In addition, Fusco, Barrera, Boyle and Paul Koenig do a great job with the song, “What Kind of Man,” in which the song denounces critics and asks, “Who could be mean enough, base and obscene enough, to take a job like that?" Anna Rudegeair plays Bambi Bernet ,a chorus girl, and the daughter of Carmen Bernstein, the co-producer of the show. Rudegeair gives an outstanding performance in this role as an eager to please member of the chorus who has almost a Betty Boop air about her. Also, Rudegeair demonstrates that she is a skilled dancer, particularly in the number, “Kansasland.” Stas Postowski plays Bobby Pepper, the star of the show within the show. Postowski is impeccably charming as the leading man.  In the roles Randy and Harv, two members of the male ensemble in “Robbin’ Hood,” are Brendan Eck and Jack Garvey. Postowski, Eck and Garvey are amusing in the second version of “In the Same Boat” that was wittily staged. Jay Fogarty plays the Boston Globe theatre critic, Daryl Grady. Fogarty provides a performance in which he depicts the perfect pretentious attitude of a theatre critic. Liam Scott portrays Johnny Harmon, the stage manager. Scott epitomizes the unflappable stage manager with a calm demeanor who is diligently dealing with the onslaught of demands from the show’s cast and production staff. Ava Sullivan plays Jessica Cranshaw, the star of “Robbin’ Hood.” Sullivan is flawless in her portrayal of the lackluster diva who is derailing the show’s Broadway bound journey. Colin Coder portrays Sidney Bernstein, the co-producer of the show who is married to Carmen. Coder provides a forceful performance as this boisterous and overbearing producer. Chris Phillips plays Detective O’Farrell, Lieutenant Cioffi’s associate who is assisting in the murder investigation. Phillips skillfully breathes life into this detective of Irish descent.

In addition, I need to mention the ensemble of this show. This group is exceptional as they bring tons of energy and enthusiasm to the stage 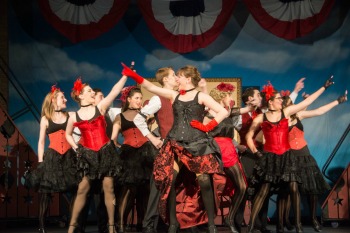 every time they appeared.  I felt each musical number in this production was strong and there was not a weak number in the show, and the number “Thataway” performed by Georgia (Emma Barrera) and the ensemble was a song that was highly entertaining and particularly well executed and strong. Members of the ensemble are: Victoria Donnelly (who also plays the role of Roberta), Brian Jones, Stephen Dierkes, Sam Halfpenny, Matt Phillips. Simon Williams, David McCabe, Kimberly Baxter, Kristen Harrison, Claire Montgomery, Michaela Zammuto, Jillian Zupito and Katherine Christen.

In this production of Curtains all aspects of the show contribute toward making this show a success. Everyone from the performers onstage to the stage crew to the ushers all make this production of Curtains a triumph. Sonny Leo I applaud for his spectacular choreography, and his music direction. Jen Lancaster designed the beautiful and bold costumes with the help of Beth Cooney. The Stage and Lighting Manager is Ryan Crenny, and the Sound Manager is Andrew Imredy. Lastly, the high quality set that was to a caliber I would expect to see in a professional production was designed by Tony Braithwaite and Joe Binck, and it was built by the Stage Crew.

This review would not be complete without mentioning Director and Producer Tony Braithwaite. Every year I am always impressed by the smart and clever direction Braithwaite brings to the Cape and Sword’s productions. He skillfully makes these shows highly entertaining for the audience, in addition to showcasing the amazing talent he has in the students in these shows. Braithwaite is supported by his team of Assistant Directors: Mike Zabel, Howie Brown, Andrew Kelly, Kevin Ryan, Shaun Slusarski and Joe Bink.

Curtains runs at St. Joe’s Prep through May 21, 2016. For more information, please visit their website at www.sjprep.org. 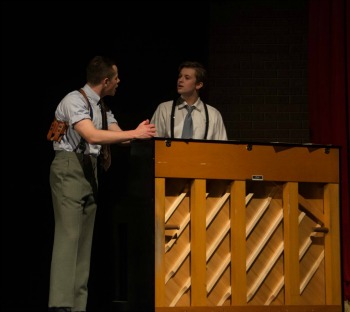 Final Thought: The Cape and Sword Drama Society’s production of Curtains is a magnificent show that is packed with outstanding performances and energetic musical numbers. It is an impressive production in which everyone’s dedication comes through from the performers to the stage crew. It is a production that audiences will thoroughly enjoy, and a production that I would highly recommend seeing if you have the chance.

I agree, I also saw this production this past weekend and I saw it a few years ago at the Walnut Street Theater. I remember wanting to leave at intermission at the Theater show, but will not do that. Kudos to this group of performers at SJP's Cape and Sword and all the persons that made it a fantastic show.