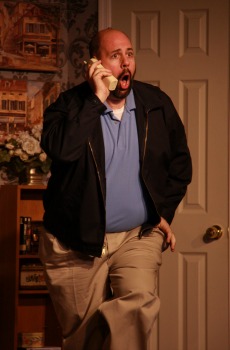 The newest show to grace the stage at Dutch Apple Dinner Theatre, Caught in the Net, is the perfect show to help cure the winter blues. It is full of humor, energy and this show will make audiences laugh their cares away. Caught in the Net tells the story of John Smith, a two timing taxi driver who has two separate families. The show keeps audiences guessing, and will have audiences laughing hysterically as the show progresses.

Caught in the Net, directed by Victor Legarreta, is the sequel to Run for Your Wife which was a hit for Dutch Apple Dinner Theatre in 2013. Do not worry though, you do not need to see Run for Your Wife in order to understand what is occurring in Caught in the Net, this play stands on its own. This play written by Ray Cooney is a farce that was nominated for a 2001 Olivier Award. Caught in the Net begins with two teenagers, Vicki and Gavin, meeting on-line and realizing they have fathers with the same name and same occupation. Vicki and Gavin want to meet in person. The father of these two teens, John Smith, has been leading a double life, and he tries to keep Gavin and Vicki from meeting. Panicked, John enlists help from his friend and lodger, Stanley. Caught in the Net is a fast-paced comedy that is thoroughly entertaining and full of laughs aplenty.

As the show starts, audiences will see a set that depicts the interior for two different homes. Set 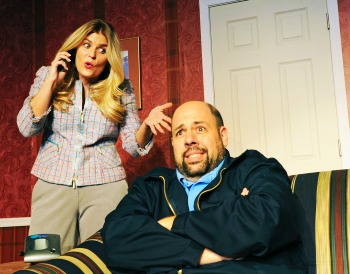 Designer, N. Stock, did this to make it easier for audiences to realize that the opening dialogue is happening in two different households.  The role of John Smith is played by Victor Legarreta. Legarreta conveys his panic throughout the show as he tries to keep his two families apart. His animated facial expressions kept the audience laughing the day I saw the show. John’s friend, Stanley, is played by Eric Hogan. Hogan is energetic, and his performance throughout the show is excellent. Playing John’s wives are Caitlin Newman as Barbara and Shannon Connolly as Mary. Newman’s character is sweet and as the play goes on, she becomes more and more exasperated with her inability to reach her husband. Connolly’s character, Mary, has a strong personality, but as the show progresses her character slowly becomes unhinged. Connolly’s depiction of the unraveling of Mary is hilarious. Playing the two teenagers are Christopher Brent as Gavin and Rachael Endrizzi as Vicki. Both actors give a fine performance as the chaos ensues around them. Rounding out this wonderful cast is Eric Cover as Stanley’s dad. Cover plays a forgetful man, who wants to have a good time. Caught in the Net has a cast that works well together in this faced-paced farce.

Final Thought: Caught in the Net is a faced paced comedy with a remarkable cast that keeps audiences laughing. It is a whimsical night of entertainment with well-rounded performances.

I would like to meet with Victor Legarreta and see the next show he performs in at Dutch Apple.