CARRIE: THE MUSICAL is Heating Things Up at Ephrata Performing Arts Center 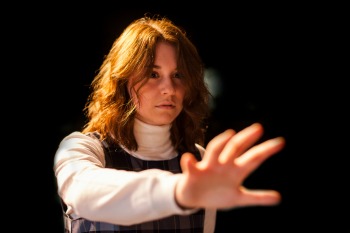 I was unsure what to expect when hearing that Ephrata Performing Arts Center was taking on Carrie: The Musical, although it definitely peaked my interest.  I was familiar with the story of Carrie, I read it many times, but I was not quite sure how this story would translate to the stage, especially in the form of a musical. However, EPAC did a fantastic job with this show, they really captured the essence of Carrie in this production.  Under the direction of Edward R. Fernandez, Carrie: The Musical is a spectacular show with outstanding performances.

Carrie: The Musical is based on the 1974 Stephen King novel of the same name. The musical, with a book by Lawrence D. Cohen, music by Michael Gore and lyrics by Dean Pitchford, tells the story of Carrie White, a misfit teenage girl who develops telekinetic powers. Carrie is tormented by her peers at school and is inhibited by her authoritarian ultra-religious mother. I remember reading the novel Carrie, and being affected reading King’s words about the bullying that Carrie endured. This musical captures just that emotional impact, it really zeros in on teenage bullying and the affect it has on teens.

Playing the role of Carrie White is Natalie Young. Young is perfectly vulnerable and gives a fierce performance. With each instance of humiliation Carrie endures from her peers, the audience can feel the mortification Carrie feels through Young’s excellent performance. Young really captures the essence of Carrie White in her performance, and her vocals are exceptional. Young starts the show strong with “Carrie,” brings out the eeriness of the show with the song, “Evening Prayers,” and lashes out in the song, “The Destruction.” Equally strong is Bobbi Bear as Margaret White, Carrie’s mother. Bear captures Margaret’s fanaticism, and was able to balance that with creating a character that was still relatable. There were moments in which I felt that underneath it all Margaret just wanted to protect her daughter from being harmed by her peers. There are incredible and powerful duets between Young and Bear. However, I found the song at the end of act one, “I Remember How Those Boys Could Dance” was a powerful number. Heather Bounds plays Sue Snell and her kindness and confliction come through during the musical. Her vocals are good especially in the song, “Once You See.” Rachel Faust portrays Chris Hargensen, the character who torments Carrie. Faust aptly depicts 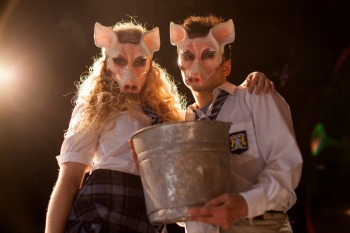 this “mean girl,” and really delves into the character and represents a teenage bully. Faust and Bounds provide strong supporting work in these roles. Andrew Patterson is wonderfully charming and kind-hearted as Sue’s boyfriend, Tommy Ross. Josh Yannuzzi finely plays Billy Nolan, the smarmy menace. Yannuzzi and Faust create a team of tormentors that is as mean as you would see in any high school nightmare. Tricia Corcran plays the gym teacher, Miss Gardner, and there is an empathy and compassion that comes from Corcran in this role. Carl Bomberger plays the other teacher depicted in this musical, Mr. Stephens, and there is a professionalism and concern that comes across in his performance. Lastly, I need to mention all the actors who played the remainder of teens I have not mentioned above because they were all full of energy, especially in the opening number, “In,” and the whole group helped to develop the plot point that explores the motivations behind the bullying of Carrie.  The performers that makes up this group are: Cora Siburt, Mary Lynn Greger, Meredith Fox, Steven Gagliano, Josh Battisti, Jessie Hoffman, Clare Laube, Joselyn Terry, Laird Farrington and Elvis Smith.

Carrie: The Musical runs at the Ephrata Performing Arts Center through October 31, 2015. For more information and tickets visit their website at www.ephrataperformingartscenter.com or call the box office at 717-733-7966.

Final Thought: Carrie: The Musical at Ephrata Performing Arts Center is a well-done production that captures the spirit of Stephen King’s original novel.  The show is moving and haunting as it delves into teenage bullying and the supernatural.