CABARET at Ephrata Performing Arts Center is Bold and Captivating 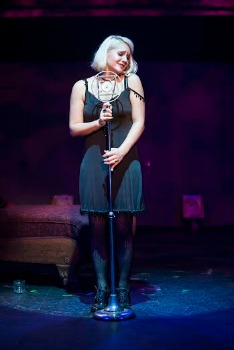 “What good is sitting alone in your room?” is a line from the captivating song “Cabaret” from the Kander and Ebb musical Cabaret. Although this song is catchy, it does not represent the darker message that comes from this musical.  Cabaret at Ephrata Performing Arts Center (EPAC) is daring, magnificent and a show that matters.

Cabaret is based on the 1951 play by John Van Druten, I am a Camera, and the stories by Christopher Isherwood. Joe Masteroff wrote the book for the musical with the music by John Kander and the lyrics by Fred Ebb. It is 1931 in Berlin, and it is a scene of corruption and debauchery. The musical Cabaret revolves around the seedy Kit-Kat Club, and the story takes place in Berlin as the Nazis are rising to power. There are many players in this musical and Cabaret looks at their individual stories at this poignant moment in history. The show is unexpected, and although this show has wonderful and familiar music, this production at EPAC is fresh and important.

Director, Edward R Fernandez, has put together a production with themes that still resonate today in our modern chaotic world. What was remarkable to me was the way that although this show had its premiere in 1966, the current production at EPAC comes across as fresh and new. In the role of the Emcee is Nick Smith. Smith is bold, and conveys an ownership of his surroundings. Smith is extremely strong in the numbers “Two Ladies” and “Money.” Martha Wasser plays Sally Bowles, an English lounge singer. Wasser brings an elegance to this role, and her renditions of “Maybe This Time” and “Cabaret” are brilliantly performed. Tricia Corcoran portrays Fraulein Schneider, a German woman with a kind heart who owns a rooming house. Gene Ellis plays Herr Schultz, a likable German man who is making the most of what life has given him. Corcoran and Ellis have great chemistry onstage and they celebrate life and happiness in the song “Married.” Sean Deffley portrays the reserved American writer, Clifford Bradshaw. Deffley does a remarkable job in portraying this very complicated character. Preston Schreffler plays Ernst Ludwig, a character who outwardly tries to be everyone’s “buddy”, but is secretly scheming and hiding his ulterior motives. Schreffler is magnificent as he begins the show as just a dodgy, but friendly character and then evolves into a character indicative of evil and hate. I also need to mention the Cabaret girls and boys, this fine group of performers are exceptional throughout the show, they portray their characters in a way that is both entertaining and disturbing which pulls the audience even further into the dark world of Cabaret.

Cabaret runs at Ephrata Performing Arts Center through November 1, 2014. For more information and tickets visit their website at www.ephrataperformingartscenter.com or call the box office at 717-733-7966.

Final Thought: EPAC’s Cabaret is bold and daring with memorable performances. Whether you have seen Cabaret numerous times or you have never seen this show, the current production at Ephrata Performing Arts Center is one that will leave audiences with a wonderful evening of entertainment and a lot to consider from the themes in the show.