BWW: The Arden Theatre’s A LITTLE NIGHT MUSIC is a Night to Remember 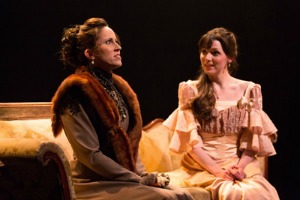 The word “brilliant” is the word that came to mind as I left the Arden Theatre after seeing their production of A Little Night Music.  Stephen Sondheim wrote the music and lyrics for this musical and Hugh Wheeler wrote the book. The Ingmar Bergman film, Smiles of a Summer Night, inspired this musical. Terrance J. Nolan directs this current production, and the Arden’s A Little Night Music is astounding.

Last month Mr. Nolan interviewed Stephen Sondheim at the Grand Opera House in Wilmington, Delaware. In this interview, Mr. Sondheim explained that the music in A Little Night Music is necessary to tell this story because it is a different way of explaining the story. Nolan uses everything on the stage to tell the story of A Little Night Music, from the set, to the costumes, to the music, to the actors. There is a precise attention to detail in this production, and that makes this show a success.

A Little Night Music takes place at the turn of the century in Sweden.  The first act introduces all the characters and the series of intersecting love triangles and liaisons that occur in the show. The second act takes place during an eventful weekend in the country. The show is brought to life by a stellar cast. The show opens with a five person chorus singing warm up notes and setting the stage for the opening scenes. This group of five people narrate as well as assist in advancing the story throughout the show. 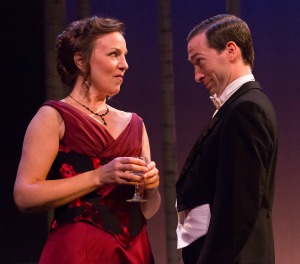 played by Patti-Lee Meringo. Mullen is strong in this role depicting his emotions throughout the show. From Mullen’s lament in the song “Now” until “Send in the Clowns” Mullen’s portrayal of Fredrik is passionate. Meringo plays the innocent Anne, and she is perfect for this role. She skillfully shows Anne’s innocence and “Every Day a Little Death” is one of the best vocals in the show. Grace Gonglewski plays Desiree Armfeldt, an actress who was a past lover of Fredrik. Gonglewski radiates sophistication as Desiree and makes the song, “Send in the Clowns” her own. Ben Dibble plays the vain Count Carl-Magnus Malcolm, who is married to Countess Charlotte Malcolm and having an affair with Desiree. Dibble is flawless in this role, and provides some of the strongest singing in the show. Karen Peakes portrays Countess Charlotte Malcolm, and she is phenomenal. She adds stinging sarcasm throughout the show, and her singing in “Every Day a Little Death” is outstanding. The entire cast of this show is exceptional and everyone involved in this production deserves credit for this brilliant production of A Little Night Music.

The set for this show is magnificent, and James Kronzer deserves applause for the fabulous design. In addition, Rosemarie E. McKelvey’s costumes are stunning. Niki Cousineau does the delightful choreography for this show. Finally, The Musical Director is Eric Ebbenga.

Final Thought: The Arden's production of A Little Night Music is brilliant and is a gorgeous production.

Also published on the Broadway World Philadelphia website on June 5, 2013.