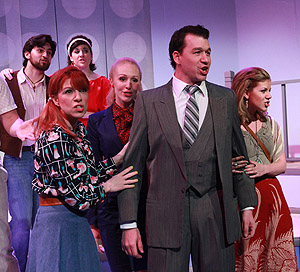 Stephen Sondheim’s COMPANY is considered one of the more challenging musicals for the cast, crew and orchestra, but if it is done well it provides for an enjoyable evening of theatrical entertainment. Pennsylvania Playhouse produces a successful show with their production of COMPANY.

George Furth wrote the book for COMPANY. Furth’s original concept for this show began with eleven one-act plays that would feature one actor who would play the lead in each of the eleven shows.  Eventually Stephen Sondheim was shown the book and ultimately wrote the music and lyrics. Hence, the musical COMPANY was born. The original Broadway production of COMPANY opened in 1970 with Hal Prince as the director.

Pennsylvania Playhouse produces a wonderful version of the beloved musical. Will Windsor Erwin directs COMPANY and he explains that although this musical was written in the late 60s, the message still resonates today. In the Director’s Notes he writes, “I thought I knew where my life was headed. . . . And with the burden of social media, I am reminded daily of my missed milestones. . . .” COMPANY opens with the thirty-fifth birthday of Robert who is still a bachelor. The musical follows Robert and his friends in New York City. Robert is afraid to get married because of the imperfections of the marriages of his friends. COMPANY takes a look at love, marriage, divorce and friendship.

Joshua Neth plays Robert, the charismatic thirty-five year old whose life we follow throughout the show. Neth moves from one scene to another flawlessly, and he captures the inner turmoil of the character effectively. His vocals are stellar throughout the show, but particularly in “Being Alive.” Andrea Cartagena portrays Joanne, the most cynical of Robert’s friends. Cartagena’s has a strong voice and her song, “Ladies Who Lunch,” was the most powerful vocal of the night. Nina Elias plays Amy who blazes through the tongue twisting song, “Getting Married Today.” Elias’s version of this song is energetic and passionate, and her performance should not be missed.

The roles of Sarah and Harry are played by Wendy Borst and John T. Monahan, they are the competitive couple. Their karate routine was animated and provided humor at the beginning of the show. The couple, Susan and Peter, are portrayed by Brittani Doyen and Alan Mendez. They play the divorced couple. Doyen’s southern charm and Mendez’s stage presence worked well together. Kimberly Tassinaro and Jason J. Zimmer play Jenny and David. Robert, Jenny and David have a scene where they all get stoned together and these three actors work well together; each line is delivered with precise comedic timing that keeps the audience laughing. The couple Amy and Paul are played by Nina Elias and Vince Rostkowski. These two actors play well off each other. Paul is sweet and caring and Amy is slightly neurotic. However, they play their roles realistically which provides great comedic entertainment for the audience.  Andrea Cartagena and Donald M. Swan Jr. portray Joann and Larry, the older couple in this group, Cartagena provides a powerful performance and Swan convincingly demonstrates Larry’s complete admiration for Joann.

Robert’s three girlfriends are played by Valynn Turkovich, Kendra O’Donnell, and Cheryl Mortiz. Each one of these actresses do a fine job portraying their character. Turkovich plays April, the ditzy airline stewardess, and brings a special charm to this character. O’Donnell portrays Marta, the free-spirited girlfriend. Lastly, Cheryl Mortiz rounds out the cast as Kathy, the girlfriend who knows she does not fit in in New York City.

The Pennsylvania Playhouse’s production of COMPANY is sure to delight audiences with its magnificent score, set, direction and acting. COMPANY runs through April 28, 2013. For tickets and information call the box office at 610-865-6665 or visit www.paplayhouse.org.

As originally published on Broadway World on April 14th 2013.

I was not familiar with this show before I read your article, but you've really sparked my interest. Thank you for all the background on "COMPANY." You've helped me make up my mind to definitely see the show!