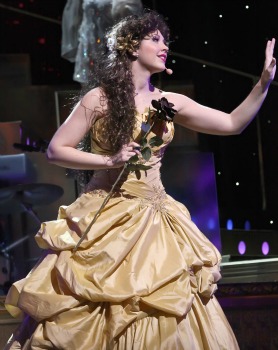 The newest original production to hit the stage at American Music Theatre is Broadway: Now & Forever. This show celebrates Broadway through songs from current Broadway shows and past Broadway hits.  The Artistic Director of American Music Theatre, Andrea McCormick successfully wrote, directed and choreographed this show. Those who love the magic of Broadway should not miss this production.

Putting on a production that takes the audience on a journey to celebrate many beloved musicals, past and present, is not an easy task. Each individual song must be able to portray the essence of the musical they are from, which can be a difficult undertaking.  The cast and crew from Broadway: Now & Forever effectively tell a story with each musical number that entertains audiences from the beginning of the show until the end.  This production at American Music Theatre offers excellent singing, brilliant costumes and scenery, and spectacular dancing, as well as brings the essence of beloved Broadway musicals to life with each song.

There are many highlights in this production, and one of the best numbers in the show is “All That Jazz” from Chicago.  Marisa Rivera dazzles in this number.  Everything about this song is perfect, the singing, dancing, and the costume are all sensational.  Another number that is remarkable is “Master of the House” from Les Miserables. Michael Austin and Kristen Brewer are outstanding in this song. Austin is incredibly energetic and emotive in his performance throughout the entire show, but his energy made his performance in this song brilliant. Brewer likewise gives a strong performance throughout the entire show, but Brewer’s performance in “Master of the House” as well as “Little Girls” from Annie is amazing. Furthermore, the performances of Angela Walker and Julie Keough in the songs from Wicked are phenomenal.  These two actors convey the friendship as well as conflict between their two characters in this one scene. This show contains show-stopping numbers performed by a variety of talented actors that everyone will enjoy.

The visual and lighting design done by Michael Smith, Andrea McCormick, and Sean Williams is incredible and adds to the splendor of this show. Andrea McCormick and Matthew V. Gotwalt designed the costumes, and Andy Roberts serves as the musical director for this production.

Final Thought: If you love the magic of Broadway, you will not be disappointed with the show-stopping numbers.

Also published on the Broadway World Philadelphia website on June 4, 2013