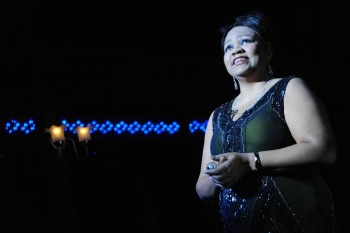 Ain’t Misbehavin’ at Bucks County Playhouse is full of energy and wonderful music that will have audiences tapping their feet along with these tunes. The cast is so full of spirit, that the audience will have to contain themselves to keep from getting up to dance in the middle of the show. This production of Ain’t Misbehavin’ at Bucks County Playhouse is one that you do not want to miss this summer.

Ain’t Misbehavin’ is a musical revue that celebrates the music of Fats Waller and other great musicians of the Harlem Renaissance. The Harlem Renaissance was a cultural movement that spanned from 1919 through the mid-1930s. This movement encouraged growing creativity, cultural awareness and ethnic pride. The title of the show comes from the title of one of Fats Waller’s most popular recordings, and this song was originally heard on Broadway in 1930.  Ain’t Misbehavin’ was conceived by Richard Maltby Jr. and Murray Horwitz. In addition, Maltby served as the director for the Broadway production, which opened on May 9, 1978 and closed on February 21, 1982. The show won the 1978 Tony award for Best Musical, Best Direction, and Best Performance by a Featured Actress in a Musical, which went to Nell Carter.

Bucks County Playhouse’s production of Ain’t Misbehavin’ under the direction of Hunter Foster is dazzling and lively. The entire cast of this show are adept a bringing their characters to life, and they each have an individual personality that they portray in the show. Each performer was fantastic, and they all were strong vocally; I need to mention a number of highlights of this production. “The Joint is Jumpin’” and “Handful of Keys” were both brilliant company numbers. These numbers both feature powerful vocals and had amazing choreography by Lorin Latarro. “Honeysuckle Rose” is a beautiful duet by Max Kimangai and Adrienne Warren. “Cash for Your Trash” sung by Aisha de Haas was the highlight of the show in Act 1. Brandi Chavonne Massey provides pleasing vocals, especially in “That Ain’t Right.”  There is one song that stood out for me in Ain’t Misbehavin’, and that song is “Viper’s Drag.” This number, performed by the charismatic Darius de Haas, is entertaining and spectacular. From de Haas’s vocals to the choreography, everything about the song was impressive. Rounding out this remarkable cast are the swing dancers, Richard Riaz Yoder and Alicia Lundgren. Yoder and Lundgren are lively and animated in their numerous dance numbers throughout the show.

I also need to mention the band, the talent of these individuals shines throughout the show. The members of the Ain’t Misbehavin’ Band are: David Alan Bunn as the conductor and pianist, Eleazar Shafer on trumpet, Matthew Roth on drums, George Grier on Bass, Anthony Nelson on Saxophone/ Clarinet and Brent White on Trombone. Additionally the artistic team needs mentioning: Wilson Chin and David L. Arsenault designed the spectacular set, Jennifer Caprio created the stunning costumes, Zach Blane did the lighting design and Jon Weston serves as the sound designer. Lastly, Hunter Foster needs congratulations for his direction of this high-energy show and bringing together this wonderful cast and crew.

Ain’t Misbehavin’ at Bucks County Playhouse runs through September 7, 2014. For more information and tickets visit their website at www.bcptheater.org or call the box office at (215) 862-2121.

Final Thought: Ain’t Misbehavin’ at Bucks County Playhouse is a high energy and entertaining show. This show has a lively cast and band, and the audience will find it impossible to keep from tapping their feet with the wonderful music of this production.