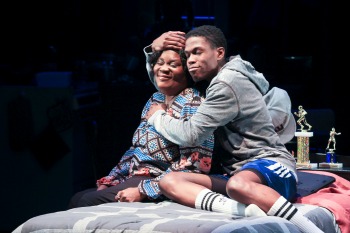 The latest show to grace the stage at Philadelphia Theatre Company is Brownsville Song (b-Side for tray). This play is a heartfelt story about the life a young man, Tray, who lost his life in a senseless way. This drama, written by Kimber Lee, is full of soul as it explores the life of Tray. As Tray’s grandmother, Lena, utters at the beginning of the play, “he was not the same old story.” Lee has a lot to say about urban violence and she successfully illustrates that in this production. Brownsville Song at the Philadelphia Theatre Company is poignant and the cast of this production give the show heart and soul.

Brownsville Song (b-side for tray) is a play that tells a story about a person, and not the story behind a headline. This play tells the story of Tray, and although the audience is made aware at the beginning of the show that Tray is shot and killed through gun violence, the play explores the life of Tray and those lives he is touched by and that are touched by his. The plot revolves around Tray, how this high school senior loves boxing, is applying to college and struggling to write an essay about himself for a college scholarship. What this play does well is it celebrates the life of Tray, and how he influenced those around him.  The play is told through flashbacks, and it shows how this tragic and senseless death affects his family, and how they try to pick up the pieces after his death.  Although there are times this play becomes unwieldy in understanding if the scene is a flashback or in the present time dealing with grief; it is an important look at how a family copes with losing someone to gun violence.

Under the direction of Eric Ting, the cast of this production infuse their characters with humanizing sentiment. Curtiss Cook Jr. plays Tray. Cook successfully captures the spirit of being a teenager from his attitude toward his grandmotherto his scholastic attitude and pursuit of the goals he is reaching toward. Kaatje Welsh plays Devine, Tray’s younger half-sister. Welsh is delightful, and her acting is top-notch. The chemistry between Cook and Welsh is strong as they depict a true brother/sister relationship. Catrina Ganey portrays Lena, grandmother to Tray and Devine. Ganey passionately conveys her characters emotions from humor to grief to frustration. Ganey starts the show in an incredibly impassioned manner telling the audience that Tray “was not the same old story,” and continuously depicting the anger and frustration with the themes in the play. Sung Yun Cho plays Merrell, the stepmother of Tray and mother of Devine, who returns after abandoning her children many years prior. There are heated moments in the show between Ganey and Cho and these exchanges are powerful and brilliantly delivered as these two characters try to deal with the death of Tray. Rounding out this cast is Anthony Martinez-Briggs who plays two characters, Junior and a Brooklyn College Student. Martinez-Briggs gives an engaging performance, especially in his role as Junior through which he relates the circumstances of Tray’s death.

Brownsville Song(b-side for tray) runs at the Philadelphia Theatre Company through May 31, 2015. For more information and tickets visit their website at  www.PhiladelphiaTheatreCompany.org or call their box office at 215-985-0420.

Final Thought: Brownsville Song(b-side for tray) at the Philadelphia Theatre Company  is a moving play that provides a great deal to consider and definitely deserves attention to its themes and message. It is show that is touching and tells a story through a cast that gives heartrending performances.