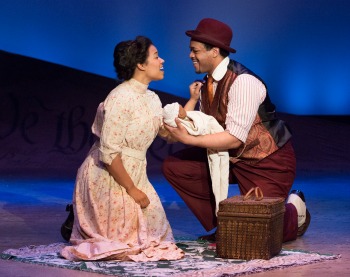 Ragtime at Bristol Riverside Theatre provides audiences with a rich and epic musical that should not be missed. This musical brings to the stage the multi-strand story of three families in America around the turn of the century. It is a magnificent musical that portrays the American experience with a lush score, elegant choreography and an exquisite cast.  The production of Ragtime at Bristol Riverside Theatre under the direction of Keith Baker is powerful, inspiring and full of heart and soul.

The musical Ragime is based on the 1975 novel by E.L. Doctorow with a book by Terrance McNally, music by Stephen Flaherty and lyrics by Lynn Ahrens. The show is a musical portrait of life in America at the turn of the century. It tells the story of three families, which represent three distinct societal groups of Americans during the sweeping changes happening in America during this time. The three groups, the upper-class Caucasian Victorian family, African Americans and immigrants, all represent the changing time. Also, the stories from these three groups of people all intertwine to create the dynamic story that is Ragtime. Their story is told through music, dancing and dialogue, and what results is this remarkable and grand musical about life at the turn of the century. 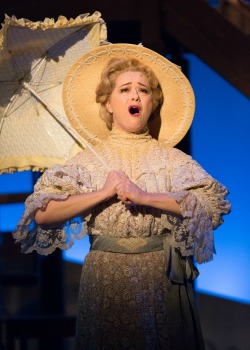 Citizens. This entire group is populated with talent. Playing the role of Mother is Leslie Becker. The aspect I love about this character is that she grows to learn that she is more than just a wife and mother throughout the show. Becker brings this realization to light in the second act, and her vocals throughout the production are beautiful. Becker’s vocals are emotional and strong especially in “Back to Before.” David Edwards plays the patriarch of the family, Father. He capably plays this stern and unyielding character, and his reprise of “New Music” solidifies his position with a touch of emotion. Ciaran Edward Barlow portrays Edgar, the young son. Barlow successfully portrays an innocent young child during this time, as he experiences the world changing around him. Jim Conte plays Grandfather and shows wit when delivering his one-liners throughout the show. Mother’s Younger Brother is played by Matt Leisy. Leisy brings this ideological character to life, and he masterfully exhibits his character‘s transformation from a young man searching for himself in the beginning of the musical to eventually finding something to believe in by the end of the show. Leisy shines in the number “The Night Goldman Spoke at Union Square.” His vocals are powerful, and this entire number is incredible.

The next group with a powerful story in Ragtime is the African-Americans whose story partly takes place in the bustle of Harlem. Derrick Cobey plays Coalhouse Walker Jr., a Harlem jazz pianist who falls in love with Sarah and who eventually fights an injustice done to him. Cobey is a presence onstage and bears the soul of his character through music in this production. Cobey effectively depicts Coalhouse’s emotions to the audience whether it is his zest for life or his indignant rage. In addition, Cobey’s performance in “Let Them Hear You” is full of passion and emotion, and it is a chill-inducing performance. Ciji Prosser portrays Sarah, the love of Coalhouse’s life. Prosser is exquisite in this role, and she and Cobey have incredible chemistry onstage. The love story between Coalhouse and Sarah will tug at the audience’s heartstrings. Prosser is vocally stunning especially in her solo “Your Daddy’s Son.” Tamar Greene plays Booker T. Washington, and he is emphatic as he portrays this iconic person. There is one more song I need to mention and that is the “Getting’ Ready Rag.” This number is one of the most spirited performances in this production. With the energy of Cobey as Coalhouse as well as members of the Harlem Ensemble (Rajeer Alford, Tiffany Byrd, Erica Cochran, Angelica Jackson, Walter E. Tucker, Dwayne Washington) and the magnificent choreography by Stephen Casey, this number is superb. 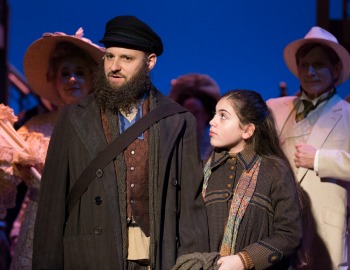 The last group this story revolves around are those who are newly immigrated to America. In the musical the immigrant portion of the story is represented by Tateh, a man who loves his daughter and who sells silhouette portraits to survive. Michael Thomas Holmes plays Tateh, and he breathes life into his character. The interaction between Holmes and Sofia Kalinda, who plays his daughter, illicit warmth and a sense of empathy towards their plight. The scenes between Holmes and Kalinda are tender and heartwarming. Holmes’s song “Gliding” is a lovely number in the production with fine vocals. The last person I want to mention is Sarah J. Gafgen who plays Emma Goldman. Gafgen is spectacular portraying Goldman. She seamlessly shows Goldman’s fiery passion, and her vocals throughout the production are solid.

There is not a weak spot in this entire production. The actors in Bristol Riverside Theatre’s production of Ragtime are full of spirit and emotion as they bring to life this amazing epic story. That being said, there is one number that really stands out, it perfectly captures the emotion and turmoil of the turn of the century, and that song is “Til We Reach That Day.” This song is the act one finale, and it is grand and emotionally moving. This entire show is a production that will have audiences talking for weeks to come.

Ragtime runs at the Bristol Riverside Theatre through April 12, 2015. For more information and tickets please visit their website 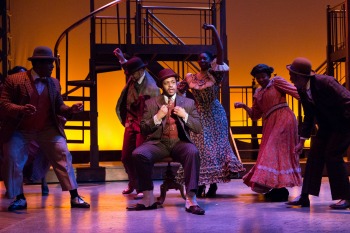 Final Thought: Ragtime at Bristol Riverside is a dazzling musical portrait of America in the early 20th century. It is full of heartbreak and hope, and this cast is spectacular. The production will have people talking for weeks to come.