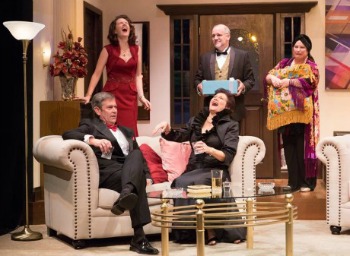 Neil Simon’s Rumors is the current show at Bristol Riverside Theatre. This show is a fast paced farce that will entertain audiences as the story unfolds. Where I feel this show excels is how the cast keeps the audience engaged in the play. This particular Neil Simon play is not one of my favorites of his works, however, I found this cast energetic and amusing. Rumors at Bristol Riverside Theatre is an entertaining and humorous farce with a cast that shines throughout the production.

Rumors premiered at the Old Globe Theatre in California in September 1988, and opened on Broadway in November 1988. This show is a farce that takes place in New York in the late 1980s. The premise of the story revolves around guests arriving at an anniversary dinner party at the home of Charley Brock and his wife, Myra. The guests, as they arrive one by one, realize the hosts, and the cook, are missing from the party. One of the guests, Ken Gorman, discovers that Charley has shot himself in the earlobe and Myra is missing. As the couples arrive they do everything within their power to conceal the events of the evening from each other and the community at large.

Under the direction of Keith Baker, Rumors will entertain audiences with the wonderful and lively cast. Danny Vaccaro portrays Ken Gorman, and Valerie Leonard plays Chris Garman. These two are the first couple to arrive at the party and they both give excellent performances. Vaccaro flawlessly depicts this frazzled character as he tries desperately not to let anyone know what has happened to the missing hosts. Vaccaro easily glides from a calm state to a panicked state, which adds to the humor of the production. Leonard gives a lively performance as Chris. She has these moments of nervousness that perfectly capture the frenzy that is unfolding around her onstage. The next couple to arrive to the party are Claire and Lenny Ganz. Eleanor Handley portrays Claire and Leonard C. Haas plays Lenny. Handley and Haas have a great dynamic onstage, and where these two excel is in how well they play off each other. She is grounded and strong-willed, whereas Haas’s Lenny is calm, although he experiences frustrated outbursts that add to the hilarity of the show. In addition, Lenny’s melodramatic explanation of the day’s events at the end of act two is incredibly well done and believably frantic. Bruce Graham and Jo Twiss play Ernie and Cookie Cusack. Graham is calm and perceptive throughout the events as they unfold, and Twiss is eccentric and has a colorful personality, which made her a joy to watch onstage. 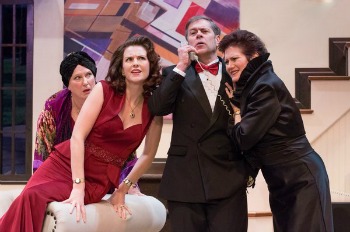 The last couple to arrive to the party are Glenn and Cassie Cooper played by Sean Thompson and Jessica Wagner. This couple also play incredibly well off each other. The tension between these two characters can be cut with a knife.  Thompson adds charm to his character and does an outstanding job as the straight-laced political minded character.  Wagner is outstanding as the spurned wife, even in moments that she does not speak her body language is full of the anger she feels towards her husband. The entire cast of Rumors have great chemistry on stage and provide well timed and witty banter, which makes this show an entertainingly humorous farce.

Rumors runs at Bristol Riverside Theatre through April 17, 2016. For more information and tickets please visit their website at www.brtstage.org or call the box office at 215-785-0100.

Final Thought: Rumors at Bristol Riverside will entertain audiences throughout the show thanks to the skillful direction of Keith Baker and the magnificent cast. This cast is bursting with energy and will delight audiences from beginning to end of the show.