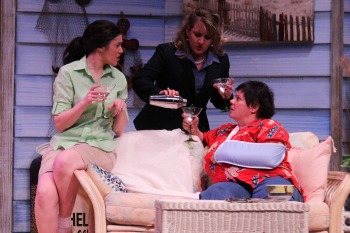 The latest show to grace the stage at Dutch Apple Dinner Theatre is The Dixie Swim Club. This touching comedy is about five Southern women who became friends in college while on the school’s swim team. It is a heart-warming show that takes the audience on a journey over 30 years through the life of these friends with all their joys and heartbreak. The production of The Dixie Swim Club at Dutch Apple Dinner Theatre is a play that has heart, and it is a show that is sure to make audiences laugh as well as  pull at their heart strings.

The Dixie Swim Club is a play written by Jessie Jones, Nicholas Hope and Jamie Wooten. It tells the story of five college friends who meet the same weekend in August at a beloved beach cottage in North Carolina. These five women meet at the same beach house every year to rekindle friendships, celebrate accomplishments and discuss the problems of children, marriage and aging. The rules for the weekend, “No men, no kids, and no work.” What ensues is witty dialogue and situations that will make the audience feel empathy with the characters and possibly bring back memories of moments from their own life’s journey. The Dixie Swim Club is a show that is not intended to be cerebral or high art, it is meant to entertain, and this show does exactly that and does it well.

Playing the role of Lexi, the self-absorbed friend who has had several failed marriages and plastic surgeries, is Kira Galindo. Galindo is great in 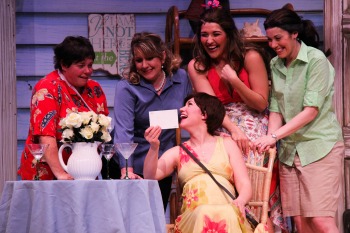 the comedic moments, and she is equally as strong in the show’s more somber scenes. Lisa Coday plays Dinah, a lawyer who is never without her cocktail shaker. Coday gives a commanding performance as the sophisticated lawyer, but she also shows her character’s emotional side. Kelly Legarreta portrays Vernadette, who deals with a rocky marriage, incarcerated children and quite simply bad luck. Legarreta makes Vernadette likable, and has perfect comedic timing in grim situations. However, my favorite part of the production is a passionate and well-delivered speech by Lagarreta in support of Southern culture and biscuits. Sheree, the swim team captain who tries to plan every moment and keep her friends in line, is played by Jennifer Hope. Hope has the presence onstage as an athlete even as her character ages, and although she tries to impose guidelines on what her friends do and eat on their weekend getaway, she comes across as a truly caring friend. Rounding out this cast is Alison Rose Munn as Jeri Neal, the former nun who is very innocent. What I liked about Munn’s performance is she evolves from a naïve young woman to a refined and self-assured person by the end of the show. The Dixie Swim Club, under the direction of Paul Bernier, is a show about life-long friendships and how these friendships bind people through the highs and lows of life.

The Dixie Swim Club runs at the Dutch Apple Dinner Theatre through March 21, 2015. For more information and tickets please visit their website at www.dutchapple.com or call the box office at 717-898-1900.

Final Thought: The Dixie Swim Club at Dutch Apple Dinner Theatre is a show that has heart, and it is a show that is entertaining and humorous and the perfect way to beat the winter blues.