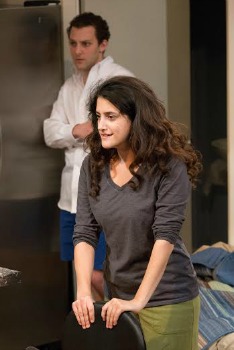 Bad Jews, currently playing at the Walnut Street Theatre’s Independence Studio, is humorous, but it also highlights brutal honesty among a family. The play tells the story of Daphna Feygenbaum, a “Real Jew,” and her cousins, who come together when their grandfather passes away. There is a dispute over who should inherit their grandfather’s chai necklace, a treasured heirloom. What I loved about this production was there are moments this show is very funny, moments where the production is poignant, and times when the show strikes an emotional chord with the audience. This show is brilliant, as it will make audiences laugh, while also providing them with a good deal to think about and discuss after the show has ended.

Bad Jews premiered at the Roundabout Theatre Company in 2012. The play written by Joshua Hampton was nominated for numerous awards including three Outer Critic Circle Awards and four Lucille Lortel Awards.  In Hampton’s script, it is as if he is asking the audience to ponder the question: What does it mean to be a good Jew? Bad Jews, under the direction of David Stradley, is bitterly funny and thought provoking.

Playing the role of Daphna, who is opinionated and brutally honest, is Sofie Yavorsky. Yavorsky is impressive in this role as she seamlessly portrays the severe hurt and anger of Daphna, and Yavorsky radiates passion and intensity in this part. Greg Fallick portrays Jonah Haber, Daphna’s quiet cousin. In the beginning of the play, Fallick is restrained, and most of his emotion comes through in his body language. Fallick is quietly brilliant in this role, as he tries his best to stay out of the way of the domineering Daphna and avoid getting drawn into family squabbles. Davy Raphaely plays Liam, who is the brother of Jonah. Liam tries to be 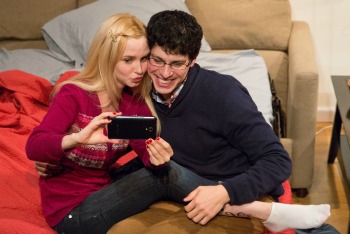 reserved and show compassion, but he has bouts of strong emotion when his cousin, Daphna, pushes him to the edge. Raphaely and Yavorsky have the most intense scenes in the show. These two fine actors convincingly show the hypocritical certainty of each of their character’s arguments. Rounding out this cast is Laura Giknis who plays Melody, Liam’s sweet and somewhat innocent girlfriend. Giknis radiates warmness, and she gives the show points of clarity in heated moments.

Final Thought: Bad Jews is an exceptional show that will make audiences laugh as well as contemplate the characters and themes in the production. The show has a remarkably talented cast, and an intelligently funny script.