‘Attend the Tale of Sweeney Todd’: Norm Lewis and Carolee Carmello are Flawless in SWEENEY TODD 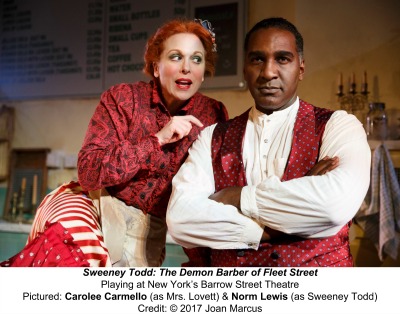 It has been a long time since I used the word “perfection” when writing about a show. However, there is no other word to describe the current production of Sweeney Todd: The Demon Barber of Fleet Street, which currently resides off-Broadway at the Barrow Street Theatre. This is a production that is thrilling, chill-inducing and electrifying. It is an experience unlike anything I have witnessed in a theatre and it takes a musical that everyone knows, and elevates it to the next level and makes it feel fresh and new. In addition, the cast is brilliant, each member of this cast is exquisite as they tell the story of Sweeney Todd and create an intimate experience that audiences will not soon forget.

One of the elements that makes this show so unique is the way in which the audience is in the center of the show. Audience members sit at long pub style tables and the show takes place around the audience. As an audience member you get to experience the intimate and chilling story of Sweeney Todd in a way that has not been experienced before. The actors are literally in the midst of the audience, they are walking on tables, interacting with audience members and a “lucky” few may even be offered a shave. What ensues is a performance that made my heart race and I was so immersed in the show that I was fully engrossed in the action that was happening right in front of me. This show is a testament to the importance of live theatre - for two and a half hours I was so immersed in this story that I completely forgot about the outside world. It allowed me to connect emotionally to those around me and the actors 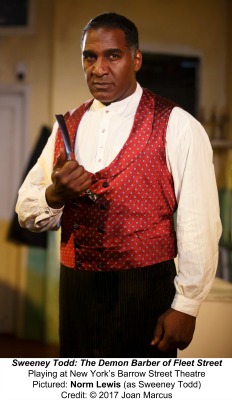 in front of me through this shared experience, and that really is the beauty of live theatre. I credit the actors in this show for doing a brilliant job with this piece, and this production of Sweeney Todd fully reminded me of how an experience like this makes me fall in love with a show all over again, and it changed my perceptions and expectations of this well-known musical.

I cannot say enough positive things about this cast because in all honestly they were all brilliant. Norm Lewis and Carolee Carmello are flawless in this show. Each time I see Mr. Lewis in any show I am reminded how he has a way of taking on a role and making it his own. That being said, his portrayal of Sweeney Todd is breathtaking.  He gives this character a vulnerability and makes the audience understand Sweeney’s anger and determination for revenge. Audiences witness directly how Sweeney is haunted and that is evident in Lewis’s eyes and body language throughout the show. His Sweeney is complicated, and Lewis has such a commanding presence that audiences are captivated by his performance. Additionally, his vocals on a whole are strong, and the song “Pretty Women” is powerful. Equally as strong in this show is Carolee Carmello as Mrs. Lovett. Carmello is exuberant, and delightful. She lights up the room as soon as she comes on stage. Carmello also makes the role of Mrs. Lovett her own, she adds a levity and humor to the role. Her rendition of “By the Sea” is amusing and vocally strong. Lewis and Carmello have great chemistry, she adds a lightness that offsets the darkness of Sweeney’s character. Also, their performance in “A Little Priest” is incredibly well done, and it is my favorite song in the show. The song is full of dark humor and Lewis and Carmello are magnificent in this number. I have seen many productions of Sweeney Todd in my lifetime, and many different actors play the roles of Sweeney and Mrs. Lovett. In all honesty, Lewis and Carmello are my favorite actors in these roles, there is something honest and impassioned about their performances. These performances are ones that I will remember each time I see a production of Sweeney Todd.

Moreover, the rest of the cast is also incredible. Matt Doyle as Anthony and Alex Finke as Joanna are full 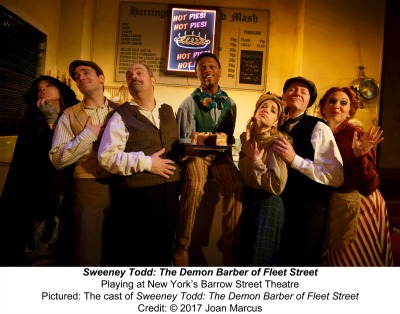 of passion in their roles. Doyle is full of life and charming as Anthony. Finke brings forth Joanna’s innocence and fearfulness. What I enjoyed about Doyle and Finke is not only their innocence, but how they brought out some of the humor in the lyrics especially in the song, “Kiss Me.” Stacie Bono is fantastic both as the Beggar Woman and Pirelli. She is vocally and dramatically outstanding in the role. Brad Oscar as the Beadle and Jamie Jackson as the Judge are perfectly cast in their roles. Oscar is full of life and jovial at moments in the show and Jackson is perfectly creepy and there were moments throughout the show that he made my skin crawl. Rounding out this delightful cast is John-Michel Lyles as Tobias and his final scene is heart wrenching. Also, his vocal in “Not While I’m Around” is beautiful and heartfelt.

The Tooting Arts Club production of Sweeney Todd is sheer perfection. The staging and the performances by this outstanding cast have changed the game for me, and I will look at this musical differently when I see it in the future. I applaud director, Bill Buckhurst, and Norm Lewis, Carolee Carmello and the rest of the cast for making this rendition of Sweeney Todd so memorable.

Run to get your tickets for this production of Sweeney Todd. For more information and tickets visit the Barrow Street Theatre’s website at www.barrowstreettheatre.com.

Final Thought: It has been a long time since I have fallen in love with a show this much. Sweeney Todd is a stunning production, and one that is very memorable. Norm Lewis and Carolee Carmello breathe new life into their roles, and their performances are unique and outstanding. Lewis’s haunted Sweeney and Carmello’s vibrant Mrs. Lovett are two of my favorite performances of all time.