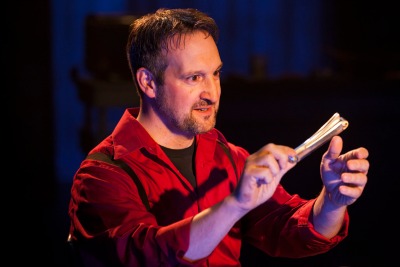 The weather is getting cooler, leaves are changing and there are ghosts and witches adorning homes throughout the area. This means only one thing that Halloween is upon us, and there is no other perfect musical than Sweeney Todd:  The Demon Barber of Fleet Street to celebrate the season of the macabre. Luckily for those of us who live in the Central Pennsylvania area there is an incredible production at Ephrata Performing Arts Center. The production is mysterious and unnerving, and I loved the way in which director Edwards R. Fernandez went for the frightening aspects of the show. It made the show seem relevant and new, and it is unlike any other production of this show I have seen. That is one of the reasons why you should get yourself to EPAC to see this production of Sweeney Todd, it is unique and well done, and I applaud the cast and crew for creating this unforgettable production.

Sweeney Todd is based on the 1973 play Sweeney Todd, the Demon Barber of Fleet Street by Christopher Bond. However, the character of Sweeney Todd has its origin in Penny Dreadfuls, which are serialized Victorian fiction. The show has a score by Stephen Sondheim and book by Hugh Wheeler. The musical had its Broadway premiere in1979 and has had several revival since then. The show is set in London and a barber, Sweeney Todd, who was previously known as Benjamin Barker, is seeking revenge for the loss of his wife and daughter. He seeks his revenge through giving close shaves to customers and then killing them by slashing their throats in the process. In addition, Mr. Todd’s barber shop is above a pie shop run by Mrs. Lovett. Mrs. Lovett is uncanny and she and Sweeney come up with an idea to help her pie shop become successful. The show is full of dark humor elements as well as many horror tropes. It is a great night of theatre that is horrifying in a good way, and provides an evening of fun entertainment. This show may not be for everyone because of the dark humor and simulated violence. However, personally, I love this show, I have fond memories of seeing Sweeney Todd as a kid when the production aired on PBS in the 1980s. The production at EPAC does not disappoint as it brings out all the elements I have loved about the show for many years.

Every single person involved in EPAC’s production of Sweeney Todd has made it a success from the direction by Fernandez to the performances by Sean Young and Bobbi Bear to the Ensemble to the lighting and set design. Everything really came together to make this show a triumph. I want to begin my description of the cast by writing about the ensemble. This group helps set the stage for the mysteriousness of the show, and they are remarkable. As soon as you enter the theatre you are met by people who are wandering the stage almost as if in a purgatory, and this helps set the mood for the story of Sweeney Todd. The group of actors who make up the ensemble are: Lauren Adkins, Regina Callie Bowe, Evan Cooper, Ali Fleming, Karey Getz, Gianna Miranda, Elizabeth Pattey, Preston Cuer, Alexander Gawn, Brian Noffke, Ian Sanchez, and Travis Zimmerman. In addition, this group beings the show with the song, “The Ballad of Sweeney Todd” and the vocals are great and the number is chilling. Playing the role of Sweeney Todd is Sean Young. Young gives a strong performance as Sweeney and he gives this character a deranged aspect. As the character evolves, so does his anger and thirst for revenge. Young’s vocals are as strong as his performances, and he does a great job with the song, “The Barber and his Wife.” Bobbi Bear portrays Mrs. Lovett. Bear gives Mrs. Lovett a quirkiness, and she and Young work well together onstage. Furthermore, she does a great job in the beginning of act two in the song, “God, That’s Good.” Kayla Place plays the virtuous Johanna, and gives stunning vocals in the number, “Green Finch and Linnet Bird.” She and Brad DeLeone, who plays Anthony, have great chemistry onstage, and DeLeone has one of the best vocals of the show with the song, “Johanna.” Stacia Smith provides bone chilling shrills and shrieks as the Beggar Woman. Smith gives a breathtaking performance as the beggar woman who is more than she seems, she is a presence onstage every time she enters.  Judge Turpin, who is the most disquieting character in the musical is played by Richard Bradbury. Bradbury gives a properly disturbed performance as he gives the character a well-balanced mixture of power and perversity.  Preston Shreffler is perfectly ominous as Beadle Banford as he affably assists Judge Turpin with his evil plans. Rogan Motter is good as Tobias, a simple minded character who is loyal to Mrs. Lovett and assists her in her pie shop. Rounding out this cast is Jordan Ross Weinhold as Signor Adolofo Pierelli, a con artist barber who loses a bet to Todd. Weinhold competently 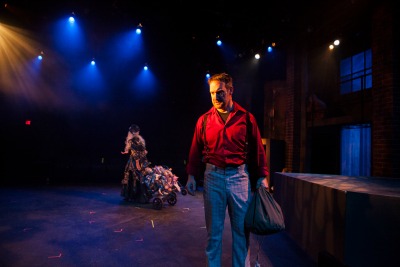 plays this farcical role and his rendition of “The Contest” showcases his strong voice.

Lastly, I need to mention the people behind the scenes for this production. The set, which has the action happening all over the theatre and resembles the streets of London was designed by Mike Rhoads. Kate Willman designed the costumes and I need to mention that Lucy’s costume was the most creative costume I have ever seen designed for this character. Jeff Cusano is the Lighting Designer and Shaun Ressler is the Sound Designer. Kristen Pontz is the choreographer and Brian Huff is the fight choreographer. Lastly, Zach Smith is the Music Director.

Sweeney Todd: The Demon Barber of Fleet Street runs at the Ephrata Performing Arts Center through November 4, 2017. For more information and tickets visit their website at www.ephrataperformingartscenter.com or call the box office at 717-733-7966.

Final Thought:  Sweeney Todd at EPAC is a remarkable production. It was clear the moment I left the theatre how many people, including myself, had thoroughly enjoyed the production. The direction, cast and crew make this show feel innovative and unique. It is a great night out at the theatre that should not be missed.