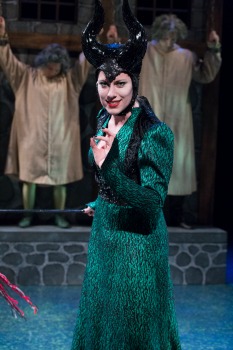 It is that time of year again, when the tradition of the musical Panto comes back to People’s Light and Theatre Company. If you have never heard of a Panto, or have never attended one of these performances at People’s Light I cannot recommend going to see one enough. These shows are family friendly, and adults and children alike will enjoy these fun and fast-paced shows. This year’s production, Arthur and the Tale of the Red Dragon, retells the tales of Arthurian legend with a few creative twists. The result is a magical show that is a perfect way to celebrate the holiday season.

For those not familiar with a Panto, it is a British tradition during the holidays. A Panto retells a well-known story or fairy tale and turns in on its ear. According to People’s Light and Theatre Company, “These familiar stories form the basis for exaggeration, variation and topical social commentary, as well as outrageous jokes, humorous songs, sprightly dances and, sometimes, a strangely affecting love story.” Arthur and the Tale of the Red Dragon: A Musical Panto is a great way to introduce children to live theatre, but the adults will love the show as well with its wit and entertaining music.

Arthur and the Tale of the Red Dragon: A Musical Panto tells the story of Arthur, or “Wart” as he is called by his adoptive family. Wart goes on a journey in which he meets magical animal friends, the wizard Merlin, an evil sorceress, a not so evil dragon and a Dame along the way. Wart learns valuable lessons from his companions and eventually finds that he is destined to be much more than a squire. Samantha Bellomo and Pete Pryor wrote the show, and the music and lyrics are by Michael Ogborn. This Panto retells the classic story of Arthur and Excalibur, and children and adults will revel in watching this adventure unfold onstage.

Playing the role of Arthur is John Mulhearn. Mulhearn gives a gentleness and compassion to Arthur that makes him perfect for this part. The 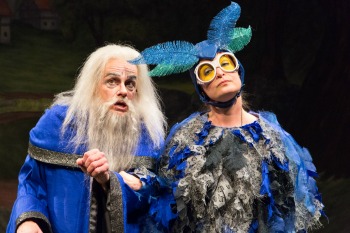 audience immediately connects with him and roots for him throughout the show. Christopher Patrick Mullen portrays the Wizard, Merlin. Mullen is animated and witty in this role. There are moments in this production when he steals the show with his antics. Mark Lazer plays the Dame of the Lake, and he is a presence onstage and brings a good deal of charisma to this part. Playing the villain, Morgana Le Fay, is Kim Carson. Carson is perfectly evil, and she has a strong stage presence that makes her flawless in this role.  The red dragon is a character in itself, and I applaud John Jarboe and Mary Tuomanen for breathing life into this creature. The entire cast of Arthur and the Tale of the Red Dragon: A Musical Panto is dynamic and they perform the show with great enthusiasm, energy and humor.  Arthur and the Tale of the Red Dragon: A Musical Panto is a creative and lively show and is sure to please people of any age. If you have never attended a Panto at People’s Light and Theatre Company, this is the perfect show for the entire family. 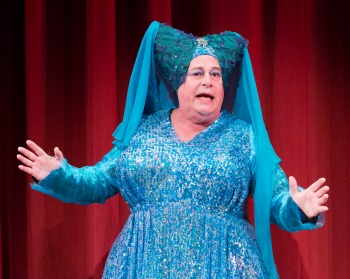 Arthur and the Tale of the Red Dragon: A Musical Panto is at the People’s Light & Theatre through January 11, 2015. For more information and ticket visit their website at peopleslight.org or call their box office at 610-644-3500.

Final Thought: Arthur and the Tale of the Red Dragon: A Musical Panto is a holiday show that you do not want to miss. It retells the classic tale of the legend of Arthur along with some twists and turns that are sure to delight audiences. This show is sure to please audiences of any age.