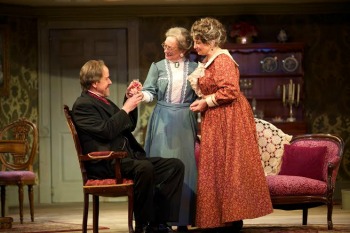 The plot of Arsenic and Old Lace centers around Mortimer Brewster, a drama critic, and his aunts, Abby and Martha. Abby and Martha are as sweet as can be, but they have a habit of killing single, older gentlemen who are alone in the world. They feel they are doing this out of mercy. What ensues is a night full of murder, mayhem and mystery.  The play was written by Joseph Kesselring in 1939, and the show opened in 1939 at the Fulton Theatre in New York (now the Helen Hayes Theatre). Eventually the show moved to the Hudson Theatre and closed in 1944. Additionally, Frank Capra made Arsenic and Old Lace into a movie starring Cary Grant, that was released after the closing of the play in 1944.

Director, Charles Abbott, has put together the perfect cast for this production. In the roles of Abby and Martha Brewster, the sweet and kind aunts 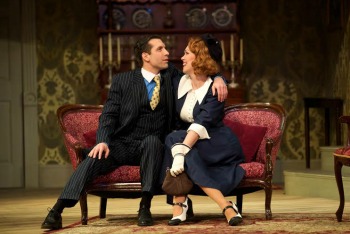 who have a little secret, are Mary Martello and Jane Ridley. The chemistry onstage between Martello and Ridley is wonderful, and gives audiences the impression that they really have been living together their entire lives. Playing Mortimer Brewster, one of the nephews of Abby and Martha, is Damon Bonetti. Bonetti is charming in this part, and he is hilarious with the way he reacts to the realization of the deeds of his aunts. Playing Mortimer’s fiancée, Elaine, is Jennie Eisenhower. Eisenhower portrays a compassionate and innocent character, and she illustrates the underlying strength of this character.  Ben Dibble plays Teddy Brewster, and he believes that he is President Teddy Roosevelt. Dibble is full of energy in this role, and he has a commanding presence onstage. Dan Olmstead plays Jonathan Brewster, a nephew who has returned home to his aunts. The character of Jonathan is a dark figure in comparison to his aunts, and he is an ominous character. Olmstead has a strong presence on stage and he successfully brings out the sinister nature of his character. Laurent Giroux plays Jonathan’s sidekick, Dr. Herman Einstein. This character is sneaky and comedic, and Giroux brought a likableness to his character. The entire cast of the show is exceptional, and this is one show you do not want to miss this year at the Walnut Street Theatre.

I also need to mention the artistic team. I was drawn into the show by the outstanding set and the music that played during Arsenic and Old Lace.  The person responsible for designing the beautiful set is the Scenic Designer, Robert Klingelhoefer. The Sound Designer is Jacob Mishler. Colleen Grady designed the costumes, and the Lighting Designer is Shon Causer.

Do not miss this production of Arsenic and Old Lace. It runs at the Walnut Street Theatre through April 27, 2014. For more information and tickets visit their website at www.walnutstreettheatre.org or call their box office at 215-574-3550.

Final Thought:  Arsenic and Old Lace is one show you do not want to miss this year. It has a talented cast, and this show will have audiences laughing from beginning to end as the hilarious plot unfolds.