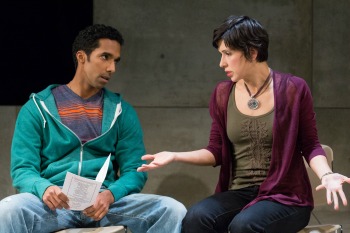 This is the time of year when theatres produce shows that are emotionally moving and contain though provoking content that will have audiences talking and thinking about what they have just experienced on stage for days. Water by the Spoonful is no exception to this. This show will remind audiences about the meaning of family, both the one we are born into and the ones that we create, and it will keep audiences engaged long after the show is over. The Arden’s production of Water by the Spoonful is a highly emotional and moving drama; the show is a well-acted production that should not be missed.

Quiara Alegría Hudes wrote Water by the Spoonful, and won the 2012 Pulitzer Prize for this play. In addition, Hudes also wrote the book for the musical In the Heights. Water by the Spoonful involves two parallel storylines that eventually collide. One story involves, Elliot, an ex-Marine who is dealing with the trauma of his experiences in the Iraq war and his cousin, Yazmin, who are both dealing with the death of a beloved family member. The other layer of the story involves a group of what seems like unrelated characters who exchange messages in an online chat room for crack addicts. The layers of this complex story are revealed throughout the show, but the main theme of this excellent show is about human connections and how these relationships get us through the harsh realities of the world we live in. Under the direction of Lucie Tiberghien, Water by the Spoonful, is a beautifully told story that examines the depth of human connections.

Water by the Spoonful is performed by an outstanding group of actors. Armando Batista plays Elliot, the Iraq War veteran, who is dealing with the 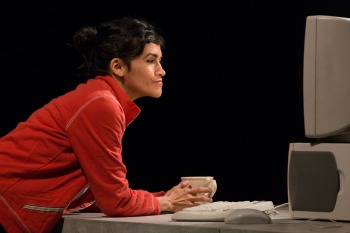 traumas of the war. Batista brings to life this conflicted character and his struggle with his personal demons. Maia DeSanti plays Yazmin, Elliot’s cousin. DeSanti successfully portrays Yazmin’s complexity, she is animated and passionate in the scenes when she is teaching music and at other times she shows her compassion for her cousin, Elliot. The actors who personify the members of the online chatroom are portrayed by Karina Arroyave, Bi Jean Ngo, Brian Anthony Wilson, and Kevin Bergin. Arroyave’s performance touches the heart, she plays a character that is kind, warm and fiery, and is making a daily effort just to keep her life together. Ngo brings humor to the show, and her character is outspoken and sarcastic. Her character is trying to come to grips with who she is. Wilson’s character is subdued and pursues structure in his life. Wilson’s portrayal of his character is engaging and impassioned. Bergen’s character is desperate, in denial and egotistical. Bergan has the ability to capture his character who is coming to grips with his addiction, and watching his character’s evolution through the show is emotional. Each character in Water by the Spoonful is complex, and they are all battling some sort of personal fears and demons, these actors do a tremendous job showing the emotional connections people make both in the real and virtual world.

The set for this production, designed by Alexis Distler, is stunning. Before the show, this set had members of the audiences guessing as to the themes and representations inherent to its design. In addition, the creative use of lighting and elemental effects add to drawing the audience into the show. The Costume Designer for this show is Alison Roberts, and the Lighting Designer is Eric Southern.

Water by the Spoonful runs at the Arden Theatre through March 16, 2014. For information and tickets visit their website at www.ardentheatre.org or call their box office at 215-922-1122.

Final Thought: Water by the Spoonful is a story that tells the story about human connections. This play is exceptionally well done through a solid script, a talented group of actors and a stunning set. Do not miss this production at the Arden Theatre.