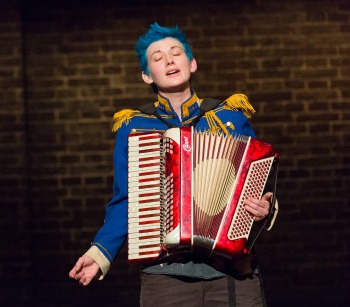 A Midsummer Night’s Dream is arguably Shakespeare’s most popular comedy. The play involves intertwining plot lines that revolve around the events surrounding the marriage between Theseus, the Duke of Athens, and Hippolyta, the Queen of the Amazons. The play begins by introducing the lovers Hermia and Lysander. Hermia loves Lysander, but her father is insistent that she marry Demetrius. Hermia’s friend, Helena, is in love with Demetrius, but he cannot stand the sight of her. The next storyline involves a play within a play. A group of six amateur actors, known as the Mechanicals, gather to put on a play for Theseus and Hippolyta’s wedding. The last storyline involves how these worlds crash with the magic fairy realm, in which Puck and Oberon all add to the greater confusion of the lovers. As confusing as all these storylines sound, it all works together to create an entertaining and fanciful intertwining of colorful dialog and story. Add in the direction by Matt Pfeiffer and this extraordinary cast, and this production of A Midsummer Night’s Dream is one of the best I have seen.

Mary Tuomanen plays Puck, a clever and mischievous sprite who enjoys setting the stage for chaos and watching it unfold. Tuomanen is a ray 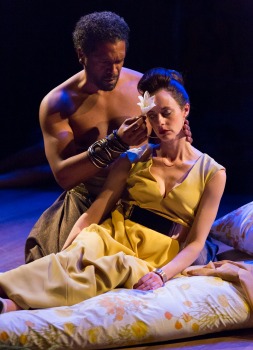 of sunshine in this part as she infuses this performance with energy. The moment Tuomanen enters the stage she is vibrant and sprightly. Lindsay Smiling plays both Theseus, the Duke of Athens and Oberon, the King of the Fairies. Smiling is versatile in these roles as he appears fluid and playful as Oberon. In addition, Smiling’s stage presence is felt in his strong and likable personality. Katarine Powell portrays Hippolyta, the Queen of the Amazons and Titania, Queen of the Fairies. Powell gives a whimsical performance as Titania as she begins prim and proper and transforms into a more passionate performance in her scenes with Dan Hodge. Where both Smiling and Powell shine is in the way they portray how their characters are constantly suspicious of one another. Taysha Marie Canales plays Hermia who is in love with Lysander. Canales has a wonderful way that brings out the determined nature of her character. Sean Close plays Lysander, and he is animated and full of spirit. He loudly professes his love in this show, and his scenes with both Canales and Rachel Camp, who plays Helena, are a joy to watch. Camp infuses Helena with intensity and frustration as she realizes the person she loves does not return the sentiment. Brandon J. Pierce portrays Demetrius, the person in love with Hermia. Pierce gives a fine performance as Demetrius who was promised Hermia as his wife, and he is determined to have what he was promised. Dan Hodge gives a remarkable performance as Bottom, a weaver who is part of the Mechanicals, a group that is looking to gain notoriety by putting on a play for Theseus and Hippolyta’s wedding. Hodge brings an abundance of energy to this role and his comedic antics are well received. Doug Hara plays Quince, a carpenter who also leads the team of Mechanicals. Hara is entertaining as he tries to command his troupe with authority while being engagingly funny. Rounding out this cast is Eliana Fabiyini who is one of Titania’s Fairies, she delivers a counterpoint of serenity and reason as well as provides the scenes with music to set the mood. The addition, the original music by Alex Bechtel, also introduces an element that helps shape the story and feels as though it makes the work a bit more accessible.

In this production of A Midsummer Night’s Dream all elements of the show contribute to create an inspired production. Paige Hathaway designed 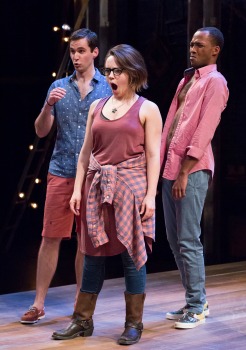 the set. Olivera Gajic designed the costumes. Thom Weaver is the Lighting Designer. Alex Bechtel is the Sound Designer and responsible for the original music.

A Midsummer Night’s Dream runs at the Arden Theatre Company through April 13, 2017. For more information and tickets visit their website at www.ardentheatre.org or call the box office at 215-922-1122.

Final Thought: A Midsummer Night’s Dream at the Arden Theatre is a shimmering example of originality. The Arden always makes their productions of Shakespeare’s plays memorable and unique. This production will delight audiences and it is a show that will leave audiences uplifted and entertained.