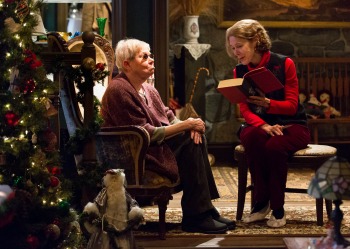 The current show onstage at the Arden Theatre is the play John by Annie Baker. John, under the direction of Matthew Decker, is a play that audiences just need to sit back and enjoy as the play unfolds on stage in front of them. What really stood out to me about this play is the humanity of the characters. Each character in one way or another has characteristics that people can relate to, but also there are secrets that each character hold within. In addition, the story takes place in Gettysburg, Pennsylvania, and there is the added element of a ghost story which is perfect for a play set in Gettysburg. Arden Theatre’s production of John is captivating and the cast is graceful as they tell the story of a weekend spent at a Bed and Breakfast in Gettysburg, Pennsylvania.

The thing that initially captured my attention when seeing John was the way that Mertis, played by Nancy Boykin, pulls back the red curtain at the beginning of each act, which seems to signify her allowing people (the audience) to witness what is occurring inside her Bed and Breakfast as well as to greet the audience. John follows a couple, Jenny and Elias, who visit Gettysburg because Elias dreamed of seeing the battlefields in Gettysburg since he was a child. This young couple argues frequently about mistakes they made or things they said unconsciously. Mertis, the owner of the B&B where Jenny and Elias are staying, overhears many of the arguments between this young couple. Mertis at first glance seems sweet and kind, but there is something mysterious and strange about the proprietor. Baker, the playwright, unpacks the lives of the characters in the show, and the audience needs to absorb the lives of the multifaceted personalities and draw their own conclusions.

Mertis, played by, Nancy Boykin takes and holds the audience’s attention throughout the show. She infuses this character with the perfect 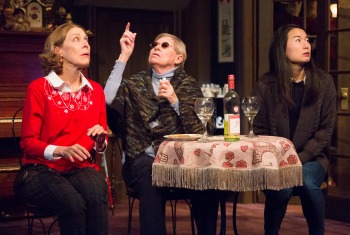 balance of gentleness, humility and mystery. When Boykin first appears on stage it is as if she is welcoming the audience into Her B&B, as she goes about and winds the grandfather clock and turns on music. The young couple Jenny and Elias, are played by Jing Xu and Kevin Meehan. When we first meet this young couple, Xu and Meehan convincingly convey the struggles they are enduring related to trust and fidelity. In addition, these two actors work exceptionally well together, and give strong performances. Lastly, Carla Belver portrays Genevieve Marduck, Mertis’s good friend who is blind and is haunted by her past. Belver is exceptional in this role. Even though Belver does not appear until the second act, she holds the audience’s attention no matter what she is doing onstage. In act two, there is a scene between Belver, Xu and Boykin where they are drinking wine and telling stories. The chemistry between these three fine actors is amazing, and it made this particular scene full of vitality.

The beautifully detailed and intricate set of John is designed by Tim Mackabee. The set is also designed to be another character in this play. There are moments that seem to increase the mystery of the show when the house begins to “act temperamental”, and gives the feeling as] if things are going awry in the B&B. Rebecca Kanach designed the costumes. Maria Shaplin is the Lighting Designer and Michael Kiley is the Sound Designer. In addition, Emilie Krause is the Assistant Director. 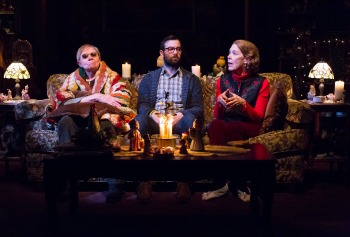 John runs at the Arden Theatre Company through February 26, 2017. For more information and tickets visit their website at www.ardentheatre.org or call the box office at 215-922-1122.

Final Thought: John at the Arden Theatre Company is a mysterious play about interpersonal relationships and it all takes place against the backdrop of historic Gettysburg, Pennsylvania. The cast of this show is outstanding as they all provide incredible performances and give each of the characters a sense of complexity. John is a fascinating and wonderful play, and it is unlike anything I have seen before.