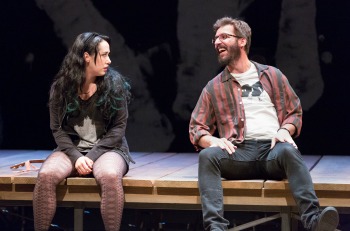 The Arden Theatre Company opens their 2016/17 season with Aaron Posner’s Stupid F***ing Bird. This play sort of adapted from Anton Chekhov’s The Seagull is one of the more original pieces of theatre I have seen in a while. Everything about this play works incredibly well together, from the writing to the cast to the set. Stupid F***ing Bird at the Arden is one of the best shows I have seen so far this season, and it is a show that is a reminder of the power of live theatre.

What I loved about Stupid F***ing Bird is that it is not a modern retelling of the Chekhov’s The Seagull. The play definitely captures the spirit of The Seagull, but it does it in a way that makes it feel as if it is a completely different story. The characters are relatable to the originals, the story line is similar, and the seagull appears throughout the show in different forms. However, this show has a completely different and vibrant feel, especially with the costumes, musical breaks and the outlooks of the characters. Stupid F***ing Bird takes place in present day, and it follows the somewhat-complicated love stories of many of the characters in the production. In addition, there is commentary on live theatre and dealing with experiencing life and being present. The thing that this play does really well is that it is very effective at making the themes of the play more broadly accessible. This play at the Arden is one show that you do not want to miss this fall.

The cast of Stupid F***ing Bird, under the direction of Aaron Posner, is exceptional. From the first moment they appear on the stage this cast 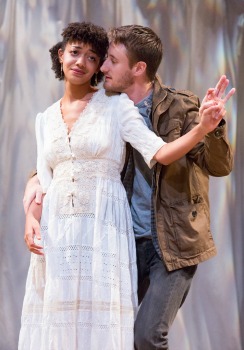 exudes passion and enthusiasm. Aubie Merryless plays Con, a playwright who is determined to create something different, which will also hopefully impress his mother Emma, a famous actress. Merryless is fantastic in this role.  There is a moment in which Con discusses live theatre and his speech is so full of passion and sentiment. This speech really makes audiences consider the power of the Arts. Dan Hodge portrays Dev, a likable and patient character who is hopelessly in love with Mash. Hodge is animated throughout the show, and he provides a hopefulness to his character. Alex Keiper plays Mash, a Goth character who seems to have a dark cloud hanging above her. Keiper is superb in this role as she portrays this character full of pent-up anger. In addition, Keiper lets Mash’s vulnerability come through in her performance, especially when she is singing her melancholy songs while playing the ukulele. Dr. Sorn, Con’s uncle, is played by Greg Wood. Wood is perfect in this role as Sorn adds tidbits of wisdom and his views on life throughout the show. However, Sorn’s wittiness is weighed down with regret, which gives this character depth and complexity. Cindy De La Cruz plays Nina, an actress who appears innocent, and who later becomes infatuated with Trigorin (Karl Miller.) De La Cruz brings a sense of mystery to this character, and she and Miller have great chemistry onstage. Miller plays Trigorin, a famous and brilliant writer, who is in a relationship with Emma (Grace Gonglewski) and has captured the heart of Nina. Miller is exceptional as the perplexing Trig, and there is a moment in which he talks about how people get worked up over little things. I found this to be a very honest moment in the play. Rounding out this incredible cast is Grace Gonglewski as Emma, a successful actress who is rather self-involved. Gonglewski is brilliant in this role, as she portrays her character’s melodramatic side, while providing witty repartee. Gonglewski lets the desperate side of Emma come through in her performance, and gives an outstanding performance in this complicated role. 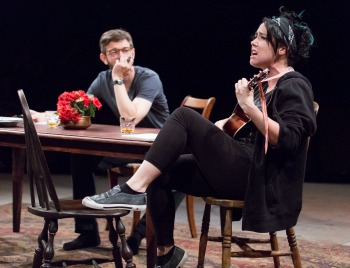 I also need to mention the creative team behind this production. Tim Mackabee designed the incredible set. Katherine Fritz designed the costumes. Thom Weaver is the Lighting Designer and Daniel Perelstein in the Sound Designer. In addition, Amy Smith serves as the choreographer.

Stupid F***ing Bird runs at the Arden Theatre through October 16, 2016. For more information and tickets visit their website at www.ardentheatre.org or call the box office at 215-922-1122.

Final Thought: Stupid F***ing Bird at the Arden Theatre is a brilliant production that is fast moving and entertaining. The entire cast of this show are superb in their roles and they all provide passionate performances. This is one play you do not want to miss this season.

Kelli Curtin is founding editor and writer for theatresensation.com. In addition, she is a contributor for the online site broadwayworld.com. Kelli is excited to share her passion about theatre and the Arts with her readers. Kelli can be found on Twitter, Facebook and on Instagram