Anything is Possible at the Dutch Apple’s BRIGADOON 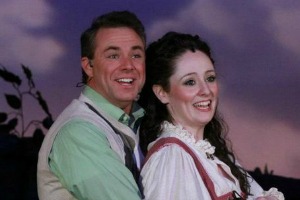 Brigadoon tells the story of two American travelers in Scotland who stumble upon a mystical town. This village only appears one day every century. The travelers, Tommy and Jeff, meet the townspeople and embark on a journey in the town of Brigadoon.

Alan Jay Lerner wrote the book and lyrics for this classic musical and Frederick Lowe wrote the music. The original production of Brigadoon opened on Broadway in 1947. Since then it has had several revivals on Broadway and the West End. Brigadoon was also made into a movie in 1954 and starred Gene Kelly and Cyd Charisse. 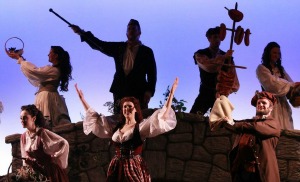 Dutch Apple Dinner Theatre does a wonderful job of producing this fairytale-like musical.  The show revolves around the impending wedding of Jean and Charlie, and the events that surround it. Adam Clough plays Tommy Albright one of the American travelers. Clough glides right into this role and he provides strong vocals throughout the show. Colleen Gallagher portrays Fiona MacLaren, the sister of the bride, with grace. When Clough and Gallagher sing “Heather on the Hill” they enchant the audience with their powerful voices in this song. Gallagher’s voice was clear and carried throughout the theatre; her voice was quite striking.  Erik Hogan plays Jeff, Tommy’s friend and companion on their trip to Scotland. Hogan adds comedic relief during the show, especially when he appears later in act one in a pair of Highland trousers. Elizabeth Brooks portrays Meg Brockie who adds liveliness to the show. Her song “The Real Love of My Life” is an energetic number and one of the best numbers in the show. Patrick Massey plays Charlie Dalrymple, the groom who is to be married to Jean. His solos are clear and compelling, and “I’ll Go Home with Bonnie Jean” is another highlight of the show.

The show has many highlights and strengths, and one of those strengths is the show’s choreography. Kerry Lambert serves as the choreographer for Brigadoon, and his dance numbers are fantastic. The first big dance number, “Down on MacConnachy Square,” is full of Scottish dancing that will have the audience wanting to clap along. Victor Legarreta is the director of this show, and he deserves credit for this wonderful production. Lastly, A. Scott Williams provides the musical direction.

I'm a musical theater nut, but somehow I've let this one show get away from me. Since childhood I've wanted to see "Brigadoon" and just have never had the chance. Weird. I am very happy to know where and when I can finally catch the show! Thank you for the information!