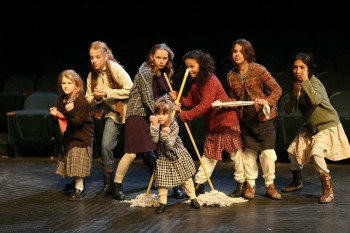 Every time I hear that a theatre is doing Annie I cannot help but be reminded of the joy I experienced while seeing the show as a child. As an adult, seeing the show I am reminded of the thrill I felt as a child seeing this musical, as well as the overall message of optimism that this show delivers. Ephrata Performing Arts Center’s (EPAC) production of Annie delivers a huge dose of positive energy as well as a cast that will brighten everyone’s holiday season with their zealous performances.

Annie is based on the popular Harold Grey comic strip, Little Orphan Annie. The original production of Annie opened in 1977, and ran until 1983.  The show starred Andrea McArdle, Reid Shelton and Dorothy Loudon.  It was nominated for eleven Tony Awards, and won seven, including Best Musical and Dorothy Loudon won for Best Actress in a Musical.

EPAC’s production of Annie is wonderfully directed and choreographed by Irving I. Gonzalez. In the role of Annie, the lovable redheaded orphan 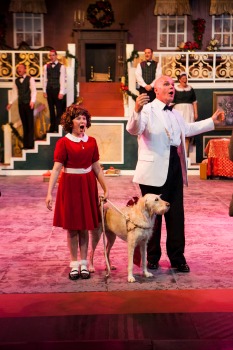 is Tori Moss. Moss is delightfully spunky as Annie. Moss, and the rest of the young orphans, are energetic in the number “It’s a Hard Knock Life.” However, Genevieve Gagnon, as Molly, is the scene-stealer in this song. In addition, as much as I liked Moss’s spirited performance throughout the show, the number “I Don’t Need Anything But You” (with Jim Rule) is one of her best numbers in the show. Playing Miss Hannigan, the person in charge of the orphans at the orphanage, is Kristie Ohlinger. Ohlinger brilliantly portrays this over-the-top alcoholic character, and she is perfect as the comedic villain. The rendition, of “Easy Street,” performed by Ohlinger, Jeff Fisher (Rooster) and Meredith Stone (Lily) is wonderfully choreographed as well as one of the strongest songs in the production. Jim Rule plays Daddy Warbucks, the billionaire who welcomes Annie into his home. Rule evolves from a determined industrialist to someone who loses his heart to the endearing Annie. The scenes between Rule and Moss are sentimental and touching. In the role of Grace, Daddy Warbucks’s assistant, is Kathleen Brantman. Brantman is elegant and is able to portray Grace’s determination and efficiency while still extolling warmth and kindness. The song, “N.Y.C.,” performed by Brantman, Rule and Moss, is a heartwarming delight.

I also need to mention the artistic team of this production of Annie. Steve Schelling and Irving I. Gonzalez designed the multifaceted set. Mercedes Maccarino designed the costumes, which are complete with the iconic red dress associated with Annie. Jeff Cusano is the Lighting Designer and Tim McGee is the Music Director.

Annie runs at EPAC through December 21, 2014. For more information and tickets visit their website at www.ephrataperformingartscenter.com or call the box office at 717-733-7966.

Final Thought: EPAC’s production of Annie is a charming show full of enthusiastic performances. The magic of Annie is that it reminds audiences of a brighter tomorrow, which makes this show a positive holiday outing for the entire family.