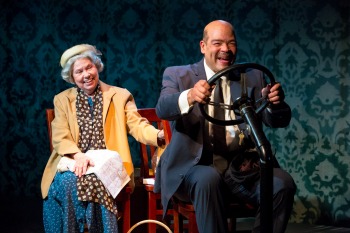 Almost thirty years after Driving Miss Daisy had its premiere Off-Broadway, this play still feels remarkably relevant today. The intimate setting at Act II Playhouse works well for this play as the audience immediately connects with the story. Driving Miss Daisy focuses on an older Southern woman, Daisy, and her chauffer, Hoke Colburn. At its heart, this play is about companionship and how friendship can transcend any barrier of race or creed. In addition, this show’s cast is perfectly suited to their roles as they draw the audience into the story while heartwarmingly depicting the growing friendship between Daisy and Hoke. Driving Miss Daisy at Act II Playhouse, under the direction of James J. Christy, is a brilliant production complete with masterful performances.

Driving Miss Daisy is a play by Alfred Uhry, which premiered Off-Broadway in 1987. It is also the first play in his “Atlanta Trilogy,” which is a series of plays that were inspired by Uhry’s experience of growing up Southern and Jewish in Atlanta, Georgia. The other two plays in this series are The Last Night of Ballyhoo and Parade. Driving Miss Daisy is about Daisy, an older Jewish woman, and her chauffer Hoke, who was hired by her son, Boolie, who insists his mother have a driver after causing an accident with her car. The play takes place in Atlanta over several years from 1948 to 1973. As the story evolves, so do the characters while they address and shatter a number of stereotypes and prejudices. Act II Playhouse’s production is gentle and moving.

This production at Act II Playhouse has all the ingredients for an exceptional evening of theatre – a strong cast, an excellent director and an 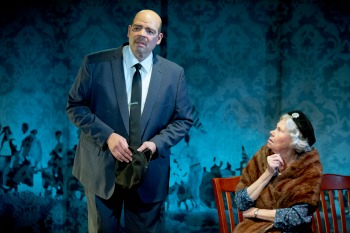 outstanding artistic team. Everything about this show works to create an incredible production of Driving Miss Daisy. Carla Belver portrays Daisy Werthan. Belver is perfect in this role, as she is spirited and stubborn as Daisy, and her facial expressions on their own convey great emotion. What struck me about Belver’s performance is how she subtly transforms from a brisk and vital retired teacher to a frail woman in her nineties throughout the course of the show, and watching this gradual change over a span of seventy-five minutes is impressive.  Brian Anthony Wilson plays Hoke Colburn. Wilson is equally as strong in his role as the chauffer. As soon as Wilson appears onstage he delivers a character that is imbued with kindness and that has a good attitude towards life. As the play develops, so does the emotional connection between Daisy and Hoke. Belver and Wilson have great chemistry onstage, and they bring to life this developing friendship. Rounding out this remarkable cast is Tony Braithwaite, who plays Daisy’s son, Boolie. Braithwaite is exceptional in this role as he creates an amiable Boolie who is caring, and yet exasperated with his strong-willed mother. In the final scene, there is a warmth and kindness that Braithwaite brings to the stage. In this final scene there is an interaction between the three characters that will remind audiences of the power of friendship, and the way in which kindness can overcome any barrier.

I also need to mention the artistic team for this show. One of the elements where this show excels is how they represent the progression of time. In order to achieve this audiences hear newscasts throughout the production from Daisy’s radio that paint an audio backdrop of significant historical events. The set designed by Daniel Boylen is also noteworthy as it appears initially to be a simple sitting room and as time evolves the wallpaper becomes more translucent to reveal imagery indicative of a changing South in the greater world outside Daisy’s sitting room. Frankie Fehr’s wonderful costumes are representative of the evolving timeline in the play. James Leitner is the Lighting Designer and John Stovicek is the Sound Designer. In addition, John Stovicek created the original music for this play.

Driving Miss Daisy runs at Act II Playhouse through March 26, 2016. For more information and tickets visit their website at www.act2.org or call the box office at 215-654-0200.

Final Thought: Driving Miss Daisy at Act II Playhouse is a brilliant production with emotionally moving and strong performances. This cast brings an intelligence and tenderness to each of their characters.  This is a show that contains first-rate performances from start to finish.