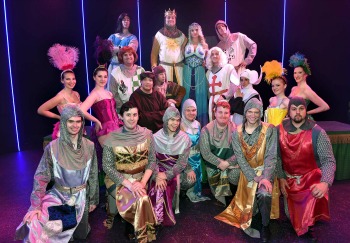 Ephrata Performing Arts Center’s production of Monty Python’s Spamalot is a show that will keep audiences laughing from the beginning to end. It is complete with killer bunnies, Knights who say “Ni,” and taunting Frenchmen. This show is loosely based on the movie Monty Python and the Holy Grail, and fans of the movie and even those who have never seen it will love the production at EPAC. The components that make this show such a success are the witty and sometimes politically incorrect script of British humor, hilarious songs, an incredible orchestra ,a dedicated production staff and a hard-working and very talented cast.

Monty Python’s Spamalot is adapted from the 1975 movie Monty Python and the Holy Grail. The musical tells a similar story of King Arthur and his Knights on a quest to find the Holy Grail. The quest, of course, is sidetracked in the manner of Python absurdity, and this cast of curious characters encounters offbeat and hilarious situations throughout their travels. Monty Python’s Spamalot has book and lyrics by Eric Idle and music by John Du Prez, Eric Idle and Neil Innes.

EPAC’s production of this show, under the direction and choreography of Pat Kautter, is complete with all the silliness that is expected from Monty Python humor, and the cast of this show certainly deliver a hilarious journey. They had the audience laughing from the very moment they took to the stage until the final bows; this cast and crew needs commended for putting on this incredible production. Carl Bomberger plays the role of King Arthur. Bomberger has a commanding presence and has excellent comedic timing as the obtuse leader. Playing the role of King Arthur’s sidekick, Patsy, is Rogan Motter, and he is hilarious. The chemistry between Bomberger and Motter is strong, and these two fine actors work well together as they deliver their jovial banter throughout the show. In addition, the song, “I’m All Alone,” is a strong number for Bomberger, and the animation and facial expression from Motter during this number makes it one of the best numbers in the production. The quartet of Bob Breen (Sir Robin), Brian Viera (Sir Lancelot), Preston Schreffler (Sir Galahad) and Darren Wagner (Sir Bedevere) all have an opportunity to shine individually and collectively throughout the show. These four fine actors truly capture the hilarity of Monty Python, and they are uproarious and full of energy throughout the show. The song, “Sir Robin,” is one of the many highlights of the show, and shows off members of this strong ensemble. Alexander P. Bannon plays several roles, the highlights being the Historian and Herbert. Bannon is perfectly apathetic as the Historian, and completely over the top as Herbert. Martha Marie Wasser plays the Lady of the Lake. Wasser not only can sing, and her songs are terrific, but she is full of sass and her melodramatic diva performance fits this character perfectly. Monty Python’s Spamalot at EPAC is a show that is loads of fun, and the production is full of memorable performances. Anyone looking for a hilarious comedy musical that will lift your spirits should definitely find time to see this production.

Monty Python’s Spamalot runs at the Ephrata Performing Arts Center through May 16, 2015. For more information and tickets visit their website at www.ephrataperformingartscenter.com or call the box office at 717-733-7966.

Final Thought: Monty Python’s Spamalot at EPAC has all the right ingredients for a fun and hilarious evening of entertainment. Everything worked well together from the performers to the musicians to the production staff creating a hilariously memorable production of Spamalot.