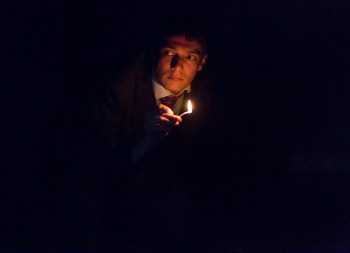 Mystery, suspense, ghosts – this is what audiences can expect when they see Act II Playhouse’s The Woman in Black. The show is a gothic ghost tale that will have audiences clinging to their seats. This play, originally a novella written by Susan Hill in 1983, has become a well-known play in both London and around the world. Act II’s version of The Woman in Black is a brilliant production that pays so much attention to detail that audiences will feel as if they are part of the production.

The Woman in Black was adapted to a stage play by Stephen Mallatratt. The play remains faithful to Hill’s book, but in order to tell the story it is a play within a play. There are two actors in the entire production and they play several characters throughout the play. The basic plot of this story is that a young solicitor, Mr. Kipps, has arrived at the Eel Marsh House to settle the affairs of a widow. What he encounters is a house full of mystery, horrors, and ghosts. So, what happens to Mr. Kipps in this house? That is the story that is being told in this play. Mr. Kipps (Dan Kern) has written his memoirs down and hired a younger actor (Jered McLenigan) to help him tell his tale of what happened at the Eel Marsh House. Mr. Kipps hopes that telling his story will help exorcise the ghosts from years past. It may sound confusing on paper, but on stage the two actors, Jered McLenigan and Dan Kern, bring to life a bevy of characters to seamlessly tell this Victorian ghost story.

Act II Playhouse’s intimate space works to the benefit of The Woman in Black. The show, directed by James J. Christy, creates a space where 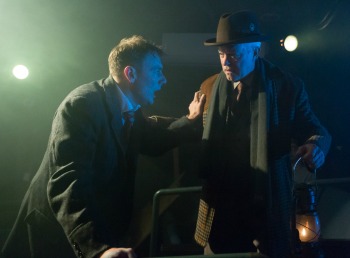 the audience feels they are transported to the marshes surrounding Eel Marsh House. Jered McLenigan is an exceptional actor, and his portrayal of the young actor is phenomenal. He transforms from an exuberant younger actor explaining to Mr. Kipps “performing is art;” to portraying the role of a younger Mr. Kipps and his experience at the Eel Marsh House. His transformation is flawless. Mr. McLenigan pays such close attention to detail in his acting, that every movement he makes helps draw the audience further into this ghostly tale. Dan Kern plays the older Mr. Kipps, and he successfully changes from an unassuming soft-spoken man who protests his inability to act, into a vibrant actor who delivers a variety of roles that require taking on other’s personas including accents and quick costume changes. Kern effortlessly switches between characters, and he is so precise that each character has their own unique personality and idiosyncrasies. McLenigan and Kern are remarkable, and the audience senses the fear exuding from then throughout the play.

The Woman in Black at Act II Playhouse should not be missed by anyone who enjoys a classic ghost story or an entertaining evening out. The show runs through November 24, 2013. For more information and tickets call their box office at 215-654-0200 or visit www.act2.org.

Final Thought: Act II Playhouse’s The Woman in Black is a thrilling production. The show will have you clinging to your seat, and the audience feels they have been transported to the marshes of England.