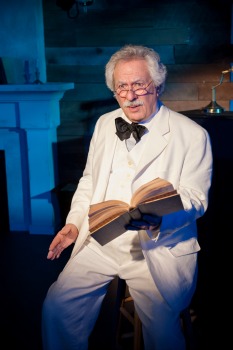 Mark Twain is not only one of the most beloved and widely read American authors, but he is also a gifted raconteur and distinctive humorist. Mark Twain Unplugged, the latest show at Act II Playhouse, wonderfully captures all these characteristics of Twain and brings him to life in this show. This production, which is like spending an evening with Twain in the form of a stop on his small town speaking circuit, beautifully captures the essence of Twain with a dialogue that is witty, passionate and clever.

Mark Twain Unplugged is an original play written and starring Tom Teti. In addition, the show is directed by Tony Braithwaite. Through the combination of these two great talents, Teti and Braithwaite bring to life the wit and personality of Mark Twain and allow modern audiences the ability to experience the charm of this great American story teller.

Tom Teti’s remarkable portrayal of Mark Twain brings him to life on stage, and this incarnation of Twain comes complete with his signature white suit. Teti is phenomenal in his performance of Twain with his energy, wit and humor. He draws the audience into the world of this iconic literary figure.  It was amazing to experience the way Teti transported audiences back to a different time especially while he read The Celebrated Jumping Frog of Calaveras County. He kept the audience engaged with his animated reading of this tale. Everything about Teti’s performance captured the spirit of Twain and captivated the audience throughout the entire show. I also need to mention Sonny Leo, who is the pianist and Music Director of the show. Leo is onstage during the production and he adds a brightness to the stage as well as comedic banter during the production.

The period inspired set that creates the perfect atmosphere for a show inhabited by Mark Twain was designed by Maura Roche. James Leitner is 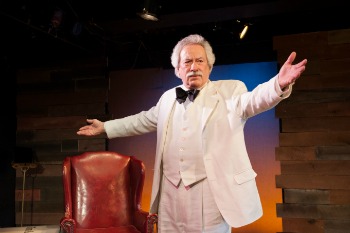 the Lighting Designer and John Stovicek is the Sound Designer.

Mark Twain Unplugged at Act II Playhouse is a show that is a rare treat as it perfectly captures Twain and his signature wit and laid back demeanor. This show runs at Act II Playhouse through February 8, 2015. For more information and tickets visit their website at www.act2.org or call the box office at 215-654-0200.

Final Thought: Mark Twain Unplugged beautifully captures the spirit of Mark Twain. I cannot recommend this show enough – it will bring back memories of your own personal adventures in the literature of this great American story teller, and this show engages audiences with Tom Teti’s brilliant performance as the iconic Mark Twain.