Act II Playhouse Presents an Engaging and Sublime ACCORDING TO GOLDMAN

According to Goldman is described as a “comedic drama.” This show is brimming with comedic moments as well as many moments that are filled with emotion. However, there is a depth to this play through its twists and turns, and intense and engaging moments. This play moves very quickly, and from the time the play begins the audience is immersed in the story. The production of According to Goldman at Act II Playhouse has a cast that engages the audience with their energy, and this is an element that draws the audience into the play. The play promises to have humor, charm and gripping moments, and this production at Act II Playhouse delivers on all counts.

According to Goldman is a play by Bruce Graham. Graham is a Philadelphia resident, and his plays have been produced in many theatres in the region such as Act II Playhouse, People’s Light and Theatre Company and Theatre Exile. In addition, Graham’s screenplay credits include: Anastasia, Dunston Checks In and the Hallmark Channel series Cedar Cove. Graham’s play, According to Goldman, follows the story of Gavin, a screenwriter turned college professor who desires to continue his career as a Hollywood screenwriter. Gavin’s wife, Melanie, has reached a point in her life where she is ready to be content and simply enjoy their life, and she wishes her husband would stop pursuing a Hollywood career. While Gavin is teaching a screen-writing college course, he meets Jeremiah, who shares a fondness for classic movies, and Gavin sees potential in Jeremiah to be a successful screenwriter.

As much as I enjoyed the smartly written script with its references to dozens of movies, it is this particular cast under the direction of David 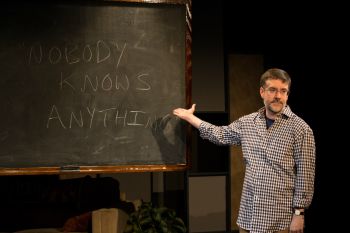 Bradley that makes According to Goldman such a triumphant show.  Tony Braithwaite stars as Gavin, a college professor who strives to be a Hollywood screenwriter. Braithwaite makes Gavin likable and he captures the essence of a college professor perfectly. One thing that Braithwaite does in this performance that stood out to me is how he brings to light how Gavin loves classic movies. In the scenes where a classic movie is part of the scene audiences can see the delight in Braithwaite’s face, and it is as if the audience is experiencing the movie along with him. Playing Melanie, Gavin’s wife, is Susan Riley Stevens. There is a certain desperation in Melanie that Stevens brings to light. Melanie is desperate to have her husband be content with where they are in life. There is a kindness to Melanie that Stevens brings to the stage, and she is immediately a likeable character. Rounding out this cast is Luke Brahdt who plays Jeremiah. When the play opens Jeremiah comes across as a very shy character, however whenever he speaks about classic movies he exudes enthusiasm. The dynamic between Brahdt and Braithwaite is remarkable. At the end of act two there is an emotional and heated moment between Gavin and Jeremiah; both Braithwaite and Brahdt manage this scene with grace, and this is a striking moment in the production.

There is an element to According to Goldman that worked remarkably well for me in this production. The way scenes change in this play is that they overlap one another. There will be a word that repeats in both scenes, and in that the focus changes from one part of the stage to another. It is almost like a transition between scenes in a film. This movement from one area of the stage to another between scenes makes the transitions seem fluid, and provides for another highlight of this production.

According to Goldman runs at Act II Playhouse through October 11, 2015. For more information and tickets visit their website at www.act2.org or call the box office at (215) 654-0200.

Final Thought: According to Goldman at Act II Playhouse is a show full of humor, charm and emotionally charged moments. The play provides the audience with a gamut of emotions from delightfully humorous to intensely emotional. This particular cast is a group of remarkable actors who make this production a successful production.