Act II Playhouse Presents a Zany THE FOX ON THE FAIRWAY 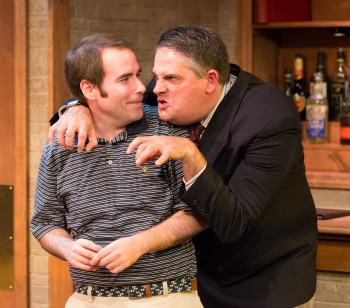 In the notes in the program, playwright Ken Ludwig explains, “The Fox on the Fairway is a farce, and it was written in homage to the great English farce tradition that began in the 1880s and flowered in the 1920s, 30s and 40s.” It is a show that at its core is designed to entertain audiences. The Fox on the Fairway is set at the Quail Valley Country Club. The plot revolves around the annual Golf Tournament between two rival clubs, Quail Valley Country Club and Crouching Squirrel Country Club, and a hefty wager between the two clubs directors, Mr. Bingham and Dickie respectively.  Bingham is hoping with the help of Justin, his eager to please assistant, that he will quash their club’s losing streak. This production with its wit, plot twists and lively performances will have theatregoers laughing throughout the entire show.

The Fox on the Fairway features a group of incredibly talented performers. Playing the role of Justin, Bingham’s eager to please assistant is Will 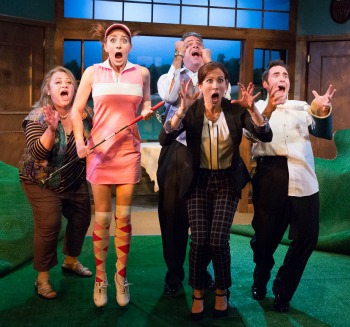 Dennis. Dennis is perfectly suited for this very excitable character. Dennis is delightful to watch in this role, and he provides great versatility in his performance that ranges from being the sweet and thoughtful fiancée of Louise to being emotionally distraught and falling to pieces. Dennis’s physical comedy and witticisms are incredibly well-done. Naomi Weiss portrays Louise, Justin’s fiancée and the kindly and naive waitress at Quail Valley who turns out not to be as clueless as she seems. Weiss is hilarious as she goes into fits of hysterics and moves quickly into moments of over-the-top cheeriness. Peter Bisgaier plays Bingham, the director of the Quail Valley Country Club. Bisgaier is perfectly cynical and clever, and has a big personality onstage. Karen Peakes portrays Pamela, a member of the Quail Valley Country Club who also aids Bingham in his shenanigans. Peakes brings a cleverness and sultriness to this role, especially in the scene in which she and Bingham become intoxicated and she pretends to have a bout of hysterical blindness. Dickie, the director of the rival Crouching Squirrel Country Club is played by Joe Guzmán. Guzmán is impeccably smug and pompous, and his scenes with Bisgaier are quick-witted and funny. Rounding out this cast is Gerre Garrett who plays Bingham’s wife, Muriel. Garrett is perfectly imperious and boisterous in this role and she has a commanding presence. 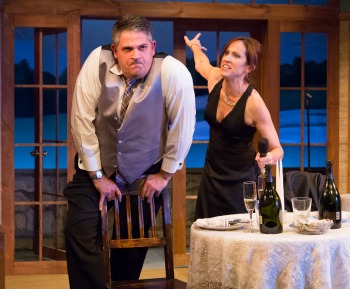 Lastly, I need to mention the artistic team behind this show. Dirk Durossette designed the detailed set of the Tap Room of the Quail Valley Country Club. Jillian Keys designed the lovely costumes, including Dickie’s obnoxious sweaters. James Leitner serves as the Lighting Designer and John Stovicek is the Sound Designer.

Final Thought: Fox on the Fairway at Act II Playhouse is a fast paced comedy that is sure to entertain and amuse theatregoers throughout the entire show. Do not miss a chance to see this hilarious, energetic and well done production.