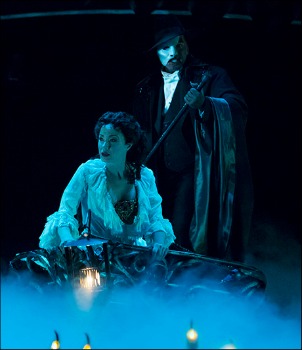 There is something special about recalling a first trip to Broadway – being in the heart of New York City, the bustling crowds, the lights, the anticipation . . . this is what a trip to see a show on Broadway is all about.  I was not only fortunate enough to have a chance to see the current cast of The Phantom of the Opera, but I also had a chance to introduce a good friend to her first Broadway show. Even in introducing a friend to the magic of Broadway, the experience was hypnotic and enchanted, and reminded me exactly what it was like to see my first Broadway show. What a better way to introduce someone to theatre than a production of The Phantom of the Opera in New York City. This production is full of life and passion, and encompasses memorable performances that audiences will not soon forget.

The current cast of The Phantom of the Opera creates a production that is full of heart, and they bring a new life to this show. This cast is one of the best I have seen perform this production and should not be missed. In the role of the Phantom is Norm Lewis. Lewis completely embodies this role with every movement on the stage. He brings intensity and a fresh new depth to this part, and his performance and vocals are hypnotizing. Mr. Lewis’s performances in “The Phantom of the Opera” and “The Music of the Night” are powerful, and these songs pull at the emotions of the audience. Playing the role of Christine Daaé is Sierra Boggess. Boggess brings innocence to this role, especially in the beginning of the show during “Think of Me.” She evolves in this song from 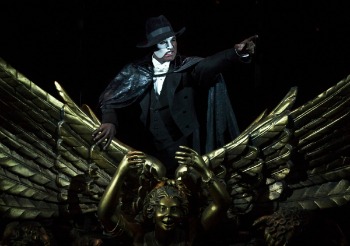 an innocent chorus girl to a powerful performer. There is also an emotional depth and empathy that Boggess gives to Christine, and her duet with Raoul (Paul A. Schaefer) is full of heartfelt emotion. Paul A. Schaefer portrays Raoul, the Vicomte de Chagny and a childhood friend of Christine. Schaefer is impassioned in this role, and he and Boggess have great chemistry onstage. Playing Carlotta, the opera company’s prima donna, is Michele McConnell. McConnell skillfully shows her contempt towards Christine, as she feels threatened by her; McConnell is superb vocally throughout the show. Cristin J. Hubbard plays Madame Giry, the choreographer of the ballet company, as well as the messenger for the Phantom. Hubbard successfully portrays this mysterious character, and is an authoritative presence on stage. Playing the opera house’s new managers, Monsieur André and Monsieur Firmin, are Laird Mackintosh and Tim Jerome. These two characters add humor during the show, and Mackintosh and Jerome show great comradery and comedic timing onstage. In the number “Note/Prima Donna” they add great wit to this number. The current cast of THE PHANTOM OF THE OPERA breathes new life into this show, if you have not seen this show or have not seen a recent production, now is the time to to get your tickets and experience this show anew.

There is one more person that needs commendation. While experiencing this production, I was fortunate enough to sit close enough to the stage that I could see the incredible detail that goes into the Phantom’s makeup. The person responsible for transforming Mr. Lewis, as well as many men before him, from man into the Phantom is Production Makeup Supervisor, Thelma Pollard. Her creation is something of a masterpiece to see, because she completely transforms the face of the actor playing the Phantom. Ms. Pollard has been metamorphosing the face of many actors who played the Phantom since 1988. Her makeup design is a work of art.

The Phantom of the Opera has everything one expects from the show, an incredible score by Andrew Lloyd Webber, amazing performances, special effects, and of course the chandelier that wows audiences at every performance. What made this particular cast stand out to me was the new energy and passion they have given this show. They made me fall in love with this show all over again.

For more information and tickets for The Phantom of the Opera, visit their website at www.thephantomoftheopera.com/new-york.

Final Thought: The current cast of The Phantom of the Opera is dynamic and forceful, and gives the show a fresh new energy. The show is full of monumental performances, and amazing effects, and it will have audiences falling in love with the show all over again.

Kelli Curtin is editor and writer for theatresensation.com. In addition, she is a contributor for the online sites broadwayworld.com and figlancaster.com and is a freelance writer. Kelli is excited to share her passion about theatre and the Arts with her readers. Kelli can be found on twitter @theatrescribe and on Facebook/theatresensation.