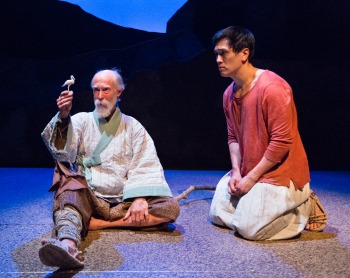 I will be honest, I had no idea what to expect from People’s Light production of A Single Shard. I knew of Linda Sue Park’s Newberry Award Winning book, but I did not know how that would translate to stage. I was thrilled to see this story come to life, it not only came to life, but is a beautiful and mesmerizing production. The story in itself is a remarkable story, but this show, under the direction of Seema Sueko, is incredibly staged with outstanding performances, and it is a delight to see. A Single Shard at People’s Light is a show that reminds us all about the power of perseverance, and it is a strong production with affecting performances.

A Single Shard was adapted for the stage by Robert Schenkkan. The play is based on Linda Sue Park’s Newberry Award Winning book of the same name. The play tells the story of a boy, Tree-Ear, who is an orphan in twelfth century Korea. Tree-Ear is a caring boy who perseveres to achieve his goal of becoming a potter and making pots as beautiful as Master Potter Min. However, along his journey throughout the show he faces many hardships such as hunger, being robbed and Min’s reluctance to train him as a potter. Tree-Ear persists to achieve his dream despite all the obstacles he faces.

Playing the role of Tree-Ear is Brian Lee Huynh.  Huynh gives a remarkable performance as he demonstrates the innocence of his character as 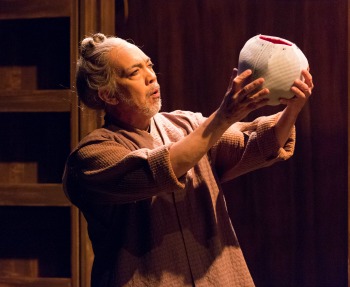 well as shows how eager he is to learn from the Master Potter Min. In addition, Huynh brings plenty of energy and passion to this role, and I enjoyed watching how this character evolves and matures during the play. Graham Smith portrays Crane Man, a frail older gentleman who has raised Tree-Ear since he was a young boy. Smith gives a strong and animated performance as Crane Man who is wise and offers words of wisdom to Tree-Ear. Playing Master Potter Min is Thom Sesma. Sesma’s character begins the show very cold and set in his ways, and watching as his character changes and adjusts his attitude toward Tree-Ear is almost magical to see. Playing his wife is Jeanne Sakata. Sakata gives an incredible performance as her character is gentle and compassionate towards Tree-Ear. In addition, the members of the ensemble, who play a variety of characters, provide a great deal of charisma to the play. The members of the ensemble are Aaron Bell, Taysha Canales, Kevin R. Free, Jungwoong Kim and Greg Watanbe.

Additionally, there are two scenes in particular that are incredibly well staged that I want to mention – the robbery scene which is so incredibly well done that I found myself infuriated by the actions of the thieves, due to the fact that all throughout the show the audience is rooting for Tree-Ear to succeed on his journey. The other scene I thought that was beautifully staged was the voyage on the boat, it was incredibly well choreographed. Lastly, the way Tree-Ear’s journey is depicted as he travels through different lands is through the use of books, and these turn out to be pop-up books. 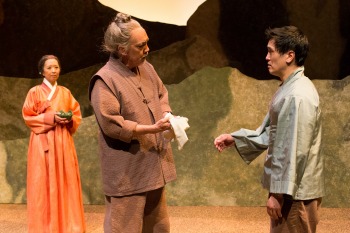 This creative use of props to depict the different lands he sees was creative, and something that really stands out in this show. A Single Shard takes the audience on a journey with Tree-Ear and they root for him as well as empathize with him as he encounters the good and bad throughout his voyage.

A Single Shard runs at People’s Light through May 29, 2016. For more information and tickets visit their website at peopleslight.org or call their box office at 610-644-3500.

Final Thought: A Single Shard at People’s Light is a show that is a reminder to audiences about the power of possibility and perseverance. This production is beautifully staged with exceptional performances. It is also a wonderfully told story that is captivating and touching.