A NEW BRAIN at Theatre Horizon is Full of Heart 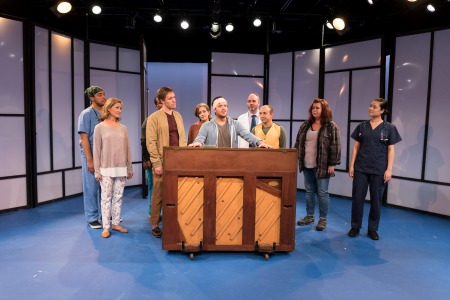 Theatre Horizon opens their 2016/17 season with William Finn’s A New Brain. This musical is based on Flynn’s real life experiences when two months after Flynn received his Tony Award in 1992 for Falsettos he passed out and was misdiagnosed with an inoperable brain tumor. This is the inspiration behind A New Brain. In addition, to the heart-wrenching story, this show has one of the best scores of the twentieth century. The production of A New Brain at Theatre Horizon under the direction of Matthew Decker is one of the best shows I have seen this year. The cast is a group of very talented actors, and the show is deeply moving while still allowing audiences to laugh at the absurdity of some of the situations they view through the distorted perception on someone with serious brain trauma.

A New Brain premiered off-Broadway in 1998, and only ran for seventy-eight performances. In addition to the music and lyrics by William Finn, the show has a book by James Lapine. A New Brain tells the story of Gordon Schwinn, a songwriter, who is struggling to meet a deadline. While dining with his friend, Rhoda, Gordon collapses during the meal. He is later diagnosed with arteriovenous malformation (AVM), and needs to have brain surgery. This musical conveys a serious topic while still being light-hearted. It will tug on audience’s emotions, it will make people laugh as well as cry.

Playing the role of Gordon Schwinn, an up-and-coming composer who is struggling to write something meaningful, is Steve Pacek. Pacek brings 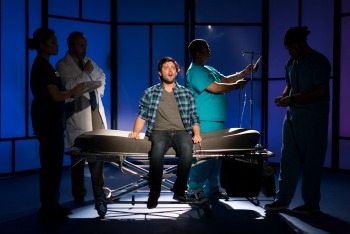 a solid voice and presence to the stage as this flawed character. His performance in the song “Heart and Music” is one of my favorite numbers in the show, and his vocals are equally as strong in the reprise of “Sailing.” Rachel Camp plays Rhoda, Gordon’s agent and friend who is very matter of fact about situations. Camp is full of personality and spunk, and has many stellar moments, such as “Whenever I Dream” and “Trouble in His Brain.” Susan Riley Stevens portrays Gordon’s mother, Mimi. Riley Stevens demonstrates the depth of Mimi, and convincingly portrays a wide range of emotions after learning of her son’s ailment. This especially comes forth in her song, “Throw It Out.” This song tugs immensely at the audience’s emotions, and Riley Stevens does an incredible job with the number. Peter Carrier plays Roger, Gordon’s boyfriend. Carrier adds a reassuring presence and gives comfort to Gordon. His rendition of “(I’d Rather Be) Sailing” is beautifully performed. Melissa Joy Hart shines as the Homeless Woman. She gives this character a wonderfully outspoken personality, and her song “Change” is one of the best numbers in the show. This song is powerful vocally and emotionally. Larry Lees portrays Dr. Jafar Berensteiner, a doctor who seems very clinical and unfeeling towards his patient’s emotional needs. Lees offers some of the biggest laughs in the show, and he is outstanding at providing comedic relief. He is outstanding in his song, “Craniotomy.” Doug Hara plays Mr. Bungee, an egotistical frog who is the star of a children’s show that Gordon writes songs for. Hara is energetic and amazing in this role, and he was fantastic in the number, “Yes.” Rob Tucker plays Richard, the nice nurse who delivers a standout performance in the number “Poor, Unsuccessful and Fat.” Mina Kawahara plays the waitress and the “not so nice” nurse. When Kawahara first appears as the waitress she is full of enthusiasm in her song, “Specials.” Rounding out this cast is Christian Eason as The Minister, and he provides humor through his portrayal of this character who does not seem comprehend that Gordon, being Jewish, may not be comforted by the exact same beliefs as he is preaching. One last person I want to mention is director, Matthew Decker. He has given this show so much heart with his direction, and this production of A New Brain is one I cannot say enough positive things about. 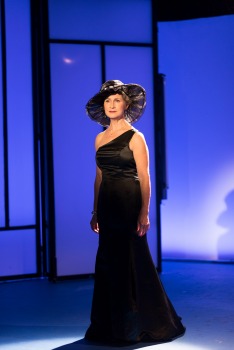 Besides a fantastic cast and director, the creative team also assisted in making this show a success. Brian Dudkiewicz designed this austere and effective set.  Jenn Rose did an outstanding job with the choreography. Oona Curley is the Lighting Designer, and the lighting of this show lends itself towards the light-heartedness of this serious topic. Jillian Keys designed the amazing costumes, in particular I thought the costumes in the Coma Sequence were stunning. Nick Kourtides is the Sound Designer. In addition, Amanda Morton serves as the Musical Director.

A New Brain runs at Theatre Horizon through November 6, 2016. For more information and tickets visit their website at www.theatrehorizon.org or call the box office at (610) 283-2230.

Final Thought: A New Brain at Theatre Horizon is one of the best musicals I have seen this year. This show is full of heart and humor. The cast of the production shines under the direction of Matthew Decker.