9 TO 5 THE MUSICAL Shines at the Walnut Street Theatre 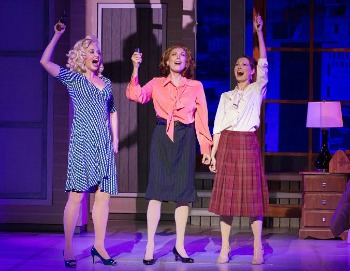 The Walnut Street Theatre opens its 206th season with the light-hearted and fun 9 to 5: The Musical. This show, which is based on the iconic 1980s movie of the same name, is entertaining and amusing. The show tells the story of three female co-workers who are fed up with their egotistical boss, and dream up ways to get even with him. 9 to 5: The Musical is zany and fun, and with this incredibly talented cast it makes this show a great way to open the 2014/15 season at the Walnut Street Theatre.

9 to 5: The Musical tells the story of three women, Violet Newstead, Doralee Rhodes, and Judy Bernly, who all dream of sticking it to their egotistical and sexist boss, Franklin Hart Jr. Dolly Parton wrote the music and lyrics for the show and Patricia Resnick penned the book (Resnick also was the original screenwriter.) The show opened on Broadway in April 2009, and closed shortly after in September 2009. 9 to 5 launched a national tour in 2009. For people who have not had an opportunity to see this show on stage, the Walnut Street Theatre’s production, under the direction of Bruce Lumpkin, is vibrant and delightful as the wonderfully talented cast brings this story to the stage. 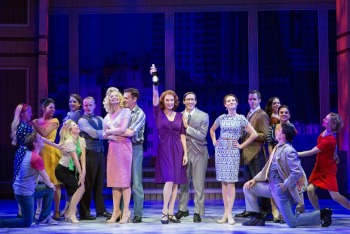 fine performance as the sarcastic Violet who is a senior office secretary, and is waiting for a long overdue promotion. Amy Bodnar is delightful as Doralee, and she shines as she sings, “Backwoods Barbie.” Amanda Rose plays Judy, who is on a path of rediscovery and subtle transformation. Rose powerfully sings “Get Out and Stay Out,” which is a remarkable number. Additionally, these three actors are outstanding in the song “Shine Like the Sun.” Paul Schoeffler plays Franklin Hart Jr., the villain boss that everyone loves to hate. Schoeffler plays a marvelous scoundrel as the lewd and self-absorbed boss. Mary Martello gives a brilliant performance as Roz, Hart’s cunning and ever faithful assistant. She is remarkable in this part, and her song “Heart to Hart” is one of the best moments in the show. In the role of Joe, a junior accountant, is Ben Dibble. Dibble is charming in this part and his performance is touching in the song, “Let Love Grow.” The high-energy ensemble also deserves mentioning. They open this show with a fun-filled lively number, “9 to 5,” and this exceptional group of performers is full of energy and vigor throughout the show.

I would be amiss if I did not mention the artistic team. The person responsible for the incredible choreography is Michelle Gaudette. Robert Andrew Kovach serves as the Scenic Designer, Colleen Grady is the Costume Designer, Lighting Design was done by Paul Black, and Will Pickens is the Sound Designer. Additionally, Douglass G. Lutz is the Music and Vocal Director.

9 to 5: The Musical runs at the Walnut Street Theatre from September 2, 2014 through October 19, 2014. For more information and tickets visit their website at www.walnutstreettheatre.org or call their box office at 215-574-3550.

Final Thought:  9 to 5 is a fun and entertaining musical that is fast moving and energetic. The cast of this show shines throughout the production, and this is a great way to start the 2014/15 season at the Walnut Street Theatre.