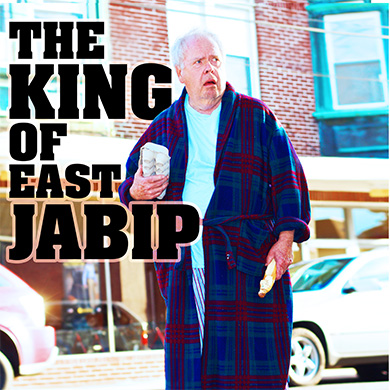 HAMMONTON, N.J. – On September 9th Eagle Theatre opens their first mainstage WORLD PREMIERE, THE KING OF EAST JABIP, written by local playwright Kelly McCarthy, starring her father, Barrymore Award Winner, Tom McCarthy. This theatrical family affair has been on the radar for over two years after having received its inaugural read at the Walnut Street Theatre.

Eagle Theatre Co-Artistic Director Ed Corsi describes the play as, “a truly heartwarming insight into the American family. Set in Philadelphia, THE KING OF EAST JABIP touches on the trials and tribulations of growing in age, losing state of mind and dealing with loss.” Witty and humorous, the new play promises to leave audiences grateful for all of life’s immeasurable beauty.

Kelly McCarthy’s first visit to Eagle Theatre was upon a performance of the highly controversial Mamet masterwork, GLENNGARRY GLEN ROSS, staring Tom McCarthy. “The first time I stepped inside Eagle Theatre I thought, this is where my play will be produced. It was like coming home. I didn’t choose Eagle Theatre. It chose me,” proudly boasts McCarthy.

The cast collectively brings multiple Barrymore nominations and wins, as well as a Lifetime Achievement Award winner to the Eagle Theatre stage. The two McCarthys share in the glory of seeing this new work come to life, as well as a determined work ethic. “When my father decided to become an actor, he just did it. There was no turning back for him, no room for failure. He just pushed on, did the work, showed up at rehearsal, got his paycheck, and went home and drank a beer. My father encouraged me to be a writer by not discouraging me. He doesn’t speak of limitations, only of possibilities if you believe in yourself and show up,” states McCarthy.

Throughout the process, Eagle Theatre has helped assist McCarthy in several workshops, drafts, and staged readings of play, including a public reading at their New Works Development Series. McCarthy concluded, “After several years of living with a bunch of characters in my head and on the printed page, it will be nice to finally get into a rehearsal room and watch them come to life. I imagine it will be like a birthing. And this playwright is past her due date. I’m ready to cut the umbilical cord.”

For more information and tickets visit their website at theeagletheatre.com or call the box office at 609-704-5012