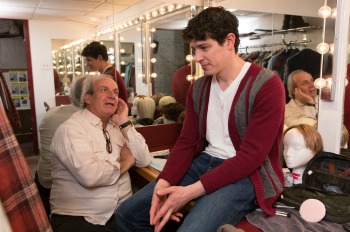 Philadelphia, PA: Walnut Street Theatre’s Independence Studio on 3 continues its season with David Mamet’s comedy A Life in the Theatre.  Philadelphia audiences will be the first to see this production before it becomes the fifth national tour of a Walnut Street Theatre production.  A Life in the Theatre begins in Philadelphia with previews on January 13th, opens January 15th and runs through February 1st in the intimate Independence Studio on 3.

The title says it all! It's A Life in the Theatre. In this behind-the-scenes comedy, Robert, an older experienced performer, and John, a newcomer to the stage, share both a dressing room and the spotlight. The play gives us a glimpse into the complex relationship that develops as the torch is passed from one generation to the next – a passing that wavers from love and mutual respect to impatience and resentment. This loving, laugh-filled look at the state of the arts is a delightful theatrical experience for anyone who loves the world of Broadway.

A Life in the Theatre was written by the award-winning playwright David Mamet. His numerous works include Glengarry Glen Ross, for which he received the Pulitzer Prize, a New York Drama Critics Circle Award and two Tony Award nominations, Speed the Plow, American Buffalo, Oleanna and The Anarchist. He was recognized with an induction into the American Theatre Hall of Fame in 2002.  In addition to his contributions to the stage, Mamet has authored novels, children’s stories, screenplays and television shows. His screenwriting credits include The Verdict and Wag the Dog, both of which received Oscar nominations, The Untouchables, The Edgeand Hannibal.

Mamet was inspired to write A Life in the Theatre by his own backstage experiences as an actor.  The play was first produced in 1977 at Chicago’s Goodman Theatre, the same year it was first produced off-Broadway at the Lucille Lortel Theatre. In 1993, Mamet adapted the play for television with Matthew Broderick as John and Jack Lemmon as Robert.  A Broadway revival opened for a limited engagement in 2010, starring Patrick Stewart and T.R. Knight.

Bill Van Horn will direct the production and play Robert.  He has appeared in several WST productions including Driving Miss Daisy, The Music 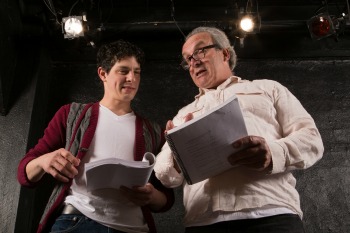 Man, and, most recently, Mary Poppins. He has directed productions for all three Walnut series, including his adaptation of Charles Dickens’ A Christmas Carol; Neil Simon’s The Odd Couple, Forrest: A Riot of Dreams and Walnut touring productions The Glass Menagerie and Around the World in 80 Days. Van Horn also wrote and starred in the acclaimed Independence Studio on 3 productions of O Captain, My Captain: Whitman’s Lincoln in 2009 and the world premiere of The Prince in 2010 (co-written with Armen Pandola).

Davy Raphaely joins Van Horn on stage as John.  Raphaely returns to Walnut’s Studio 3 after performing in Bad Jews as Liam Harbor. He was last seen in the Independence Studio on 3 production of Proof and on the Mainstage in The Eclectic Society. Regionally, Raphaely has performed with Philadelphia Theatre Company, Forestburgh Playhouse, The Arden and 11th Hour Theatre Company.

Following the success of the first four national tours of Walnut Street Theatre productions, The Glass Menagerie, Proof, Around the World in 80 Day and Driving Miss Daisy, A Life in the Theatre is the fifth Walnut production to embark on a tour. The Walnut celebrates Philadelphia’s finest talents and is proud to share them with America. In addition to traveling nationally, A Life in the Theatre has been selected to be part of the 2015 Bermuda Festival of the Performing Arts.  For more information about Walnut Street Theatre national tours, visit WalnutStreetTheatre.org.