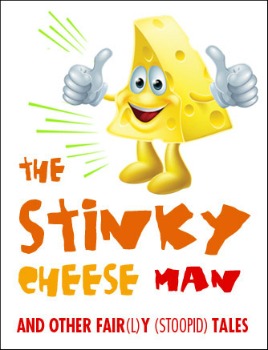 PHILADELPHIA, PA: Kids and their adult friends will love the WST for Kids’ production of Stinky Cheese Man and Other Fair(l)y (stoopid) Tales. Based on the book by Jon Scieszka, this hour-long musical comedy brings fairytale stories to life at Walnut Street Theatre January 31st through February 8th, 2015.

Audiences are invited to enter a weird and wacky world where Jack tries to save himself from the Giant, and runs into some crazy characters along the way! Come along as storybook favorites collide in this fairytale adventure. There's an ugly duckling that grows up to be a really ugly duck, Cinderumplestiltskin and, of course, that Stinky Cheese Man. Classic children’s tales are given a modern twist that is sure to have kids (and adults) giggling in their seats.

Walnut Street Theatre for Kids encourages families to read together and discover a whole new level of imagination when they see books come to life onstage. The Walnut takes pride in bringing families together and beginning a creative conversation through reading and the arts.

Stinky Cheese Man and Other Fair(l)y (stoopid) Tales  is based on the book by Jon Scieszka. Scieszka has authored many popular children’s books including The Frog Prince, Continued and The True Story of the 3 Little Pigs!.  Additionally, he authored the popular book series Time Warp Trio, which was adapted for television for Discovery Kids.  Known for his creative and engaging story telling for young audiences, Scieszka notes “My motto in writing is: ‘Never underestimate the intelligence of your audience.’ Kids can be silly and smart!” Playwright Kent Stephens adapted Stinky Cheese Man… for the stage. Stephens additional works include Orson Welles Rehearses Moby Dick, Angelheaded Hipster and Mrs. Mackenzie’s Beginner’s Guide to the Blues, winner of the 2000 Roger L. Stevens award from the Kennedy Center Fund for New American Plays. He is also the Founding Artistic Director of STAGE FORCE in southern Maine.

Philadelphia native Damon Bonetti directs this wild and crazy musical adventure!  Bonetti is no stranger to the Walnut stage, having performed in Arsenic and Old Lace, Around the World in 80 Days, The Glass Menagerie, The Last Night of Ballyhoo and Criminal Hearts. His directing credits include The 39 Steps (Hedgerow Theatre), The Taming of the Shrew (Commonwealth Classic Theatre Company) and the world premiere of True Story (Passage Theater). Off-stage, Bonetti co-founded the Philadelphia Artist Collective in 2008. Mark Yurkanin (Seussical Jr., Pinkalicious, A Christmas Carol) will join Bonetti as Music and Vocal Director, along with Samuel Antonio Reyes (Alice in Wonderland Jr., Pinkalicious, A Christmas Carol) as Choreographer for this production.

From a giant beanstalk to a lily pad pond, Scenic Designer Ryan McLaughlin takes audiences to a far-away land filled with imagination. McLaughlin is one of the Walnut’s Carpenter Apprentices and is making his Walnut debut as Scenic Designer with this production. Additional design credits include Make Me a Song: The Music of William Finn, A Year with Frog and Toad and The Rivals at West Chester's Main Stage Theatre. Walnut’s Costume Apprentices Kayla Speedy and Sara Lindsey transform the cast into lovable fairytale characters through their creative costuming.  The Walnut welcomes back Sound Designer Ryan Peavey (A Christmas Carol, Pinkalicious) and Lighting Designer J. Dominic Chacon (The Rise and Fall of Little Voice).

The cast is full of actors who are all members of The Theatre School at Walnut Street Theatre. Nate Golden from Philadelphia leads us through this silly story as Jack of Jack and the Beanstalk. A teacher at The Theatre School, Nate has performed in Walnut productions including Grease, A Christmas Carol and Alexander Who’s Not Not…Going to Move. The kissable frog prince will be played by Langston Darby from Philadelphia. Darby is also a faculty member at The Theatre School and is currently a company member of ComedySportz Philadelphia. Sarah Biddle, from Hockessin DE, takes the role of Little Red Hen. Biddle was recently seen at the Walnut in Mary Poppins and had the title role in last season’s Pinkalicious. Walnut Acting Apprentices fill in the rest of this crazy cast of characters. Tom McGovern (Allentown, NJ) plays the fast-talking and quick-witted Foxy Loxy. Katie Johantgen (Wayne, PA) joins the cast as the beautiful Princess, and Adrienne Wells (Detroit, MI) plays the sassy Cinderella. Lastly, running through this fairytale adventure as the Stinky Cheese Man is Jurä Davis (Charlotte, NC).

Students will love this tale when they visit the Walnut on school trips! Every year, thousands of students experience live theatre for the first time when their teachers bring them to WST for Kids’ productions. Students read the book in class and then see the story burst to life on stage. Stinky Cheese Man and Other Fair(l)y (stoopid) Tales is an ideal outing for any storybook lover, young and old,  with matinee performances January 31 through February 8, 2015.

The media sponsor for Walnut Street Theatre for Kids is Courier Post. Tickets are only $14-$16 with group discounts available for groups of ten or more. Study guides are available for teachers and school groups on the Walnut’s website. For tickets and information, please call 215-574-3550 or 800-982-2787. Tickets can also be purchased online at Ticketmaster or by visiting the Walnut’s website at www.WalnutStreetTheatre.org.